Greetings Me Droogs and Droogettes!
Time for another round of Sergeant's Time Saturday!
Because of my birfday gift, we'll go over one of the more common small arms in the military's arsenal.  The older M203 and the newer replacement, the M320 40mm Grenade Launcher.
The M203 is a rifled, single-shot 40 mm under-barrel grenade launcher designed to attach to a rifle.
Thusly: 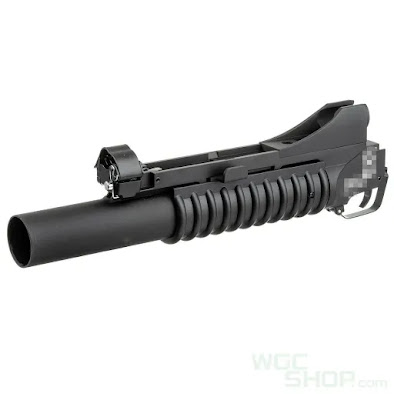 It's a single shot, breech load that opens like a pump-shotgun. 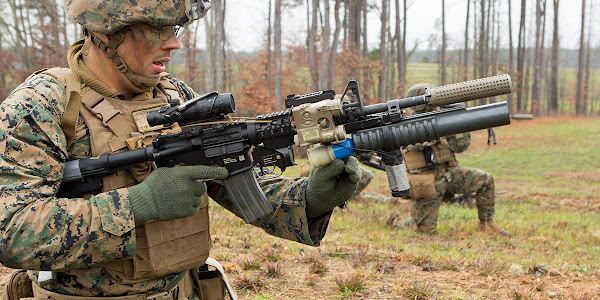 As seen here with a blue-tipped training round, you can see how the round is 'fed' into it.  It's been in service since 1969, originally with the SF Kids who wanted a 40mm weapon that was mounted ON the M-16 as opposed to the separate weapons system, the M-79 "Bloop" Gun, which was a standalone 40 mike mike that looked like a retarded single shot shotgun.
It's a aight weapon.  Meant to give the Infantry a bit more 'bang for the buck'
Its designed to break through windows and exploding inside where bad guys might be.
Interesting side note:  In Iraq, the accuracy at longer distances, the 203 wasn't that great... leastways for the EOD kids who were using it to make IEDs do the whole 'sympathetic detonation' thing.  So, someone somewhere found a bunch of old M-79, rebuilt them, and gave 'em to the EOD folks...The M-79 has a longer barrel, ergo, more rifling, ergo more accurate.  And with IEDs?  Accuracy means a lot.  It was kinda cool to see a Nam Era weapon still banging away in 2005 eh?
So, part of the problem with the 203 is the age (most are really old, and therefore they tended to be 'loosely' mounted with a lot of 'play' thereby adding to the accuracy issues.  They also tend to have extraction issues, getting the spent round out usually involves a cleaning rod down the muzzle after firing 'cause the extractor was and is a flimsy piece of shit.
Ask me how I know
So, Big Army went out and contracted with H&K and bought the M320 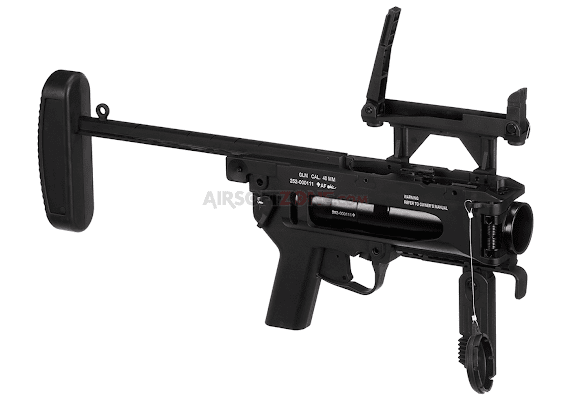 This's it in standalone mode.  It's got a pistol grip, features a spring loaded side load, and is double action on the trigger as opposed to single action on the 203.  It comes issued with the retractable stock, and a digital rangefinder which helps to figger out if the target is in range.  Lase and Blaze apparently.
That being said, the "Gee-Whiz" factor equals mor weight.  Never liked by the guys carrying it over distance.
It too can mount on the underside of the M-4 as this: 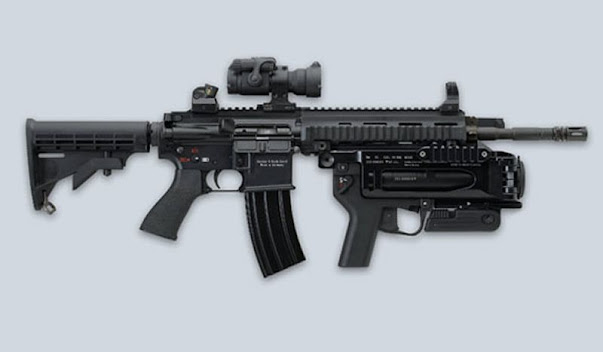 OK, now, to be honest, the guys I talked to who I issued these to (yeah, I was on the initial fielding for them back when I was doing the Depot Level Small Arms Repair thing) had a love/hate thing going on.  For one major issue was the bulkiness of the fucker when it's underbarrel.  Purely loved it in self-standing mode tho... more accurate, and the load/unload of the round meant a far faster increase in round output downrange.
Faster Boom Boom is sometimes a good thing.
It loads like this: 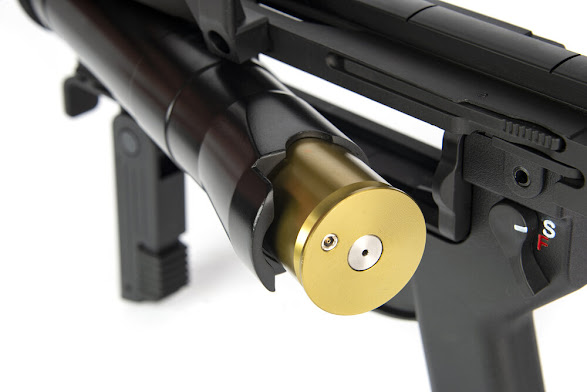 Now, unlike the 203, the 320 when you hit the 'eject' button, the 320 literally springs open and spits out the spent shell.  Like violently.  Compare this to the 203, where you push the release, slide the barrel forward, and IF you don't have a shitty extractor, the empty casing falls out.
HOWEVER, If the extractor is a pile of feces, the shell stays in the barrel, necessitating a cleaning rod down the bore to punch the case out.
Pain in the ass in combat n'est pa?
Yah.  I think so too.  But like I said, the grunts I talked to have a love/hate.
Pros 203:
Proven
Longevity
Simplicity
Light
Cons 203:
Old
Shitty Extraction
Wobbly Mounts (even after an update kit)
Pros 320:
Speed of reload
Spring loaded ejection
Hi Speed sights
Can be used as a standalone weapon w/accessories
Cons 320:
Bulky
Heavy
Shorter barrel, (less accurate?  not sure -yet-)
Can be used as a standalone weapon (but requires a LOT more bullshit to carry)
The sights on a 203 and a 320 are the same... except for the Gee-Whiz 320 laser-rangefinder.
One is a Leaf sight 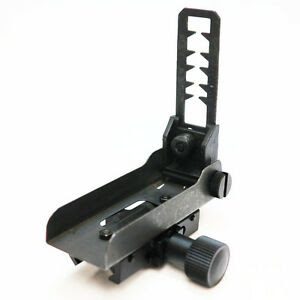 Good for about 200-250 meters.
Mounts on top of the top heat shield, tho nowadays the front heat shields are all picatinny rails...hence why the mount has a 'quick' crank mount.
The other, which is good to 400 meters, is the quadrant sight 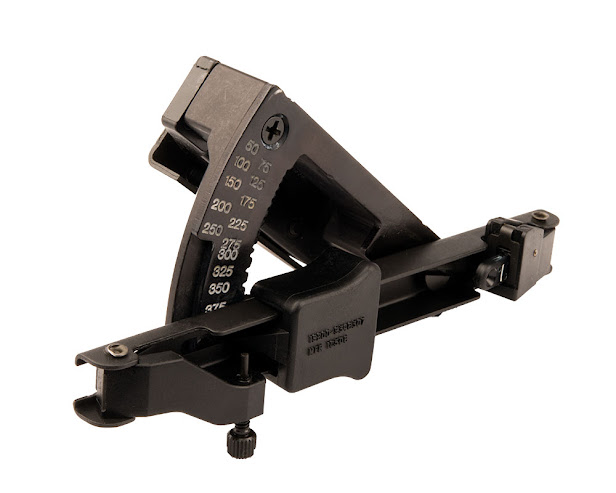 as you can see, it's got two flip out sight posts, and the thing slides up n' down for aiming.  Set the slide to whatever estimated range the target is at, aim thru the peepsites, and >BLOOP!<
HE on target.
I have both for my Havoc Launcher (a bringback from Iraq 10 years ago) When I found them new in the box back then, it was "Hmmn... wonder if'n I'll ever need grenade launcher sights?"
Talk about pack-rattish and forward thinking Aye?
Good thing I did... new in-the-box quadrants are like $200 bux...
So anyways...
Now... onto ammunition... Couple of important things
Main issue:  If you capture a bunch of 'linked' 40 mike mike ammo....
NEVER FUCKING USE IT IN A 203 OR 320
The ammo looks thusly: 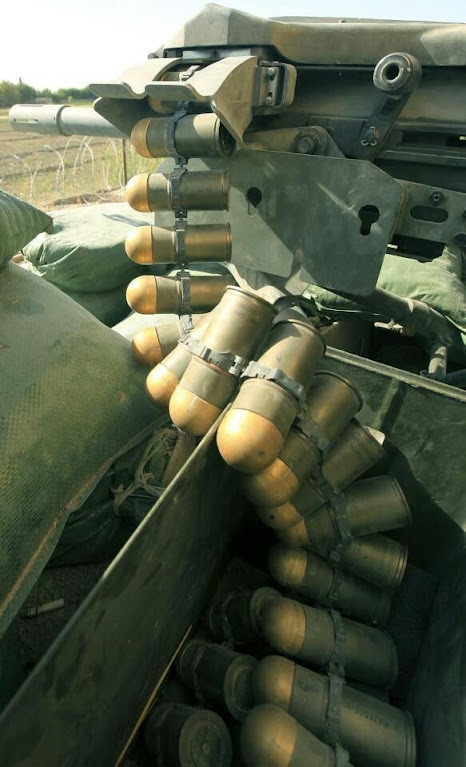 My personal fave is the M576... Big assed super-buckshot round... good in-close weapon on hordes-o'-hajjis.
Yeah, I ain't right.
So, there ya have it.
Hope you Enjoyed it.
More Later, I Remain The Intrepid Reporter
Big Country