Greetings Me Droogs and Droogettes!
Welp... what a shitshow today.  Everyone and their mother's been calling in at work... getting -everything- out of the way before the Mandatory "Doctor's Two Weeks in the Bahamas" or whatever sawbones go to during the 'Rona Lung Aids.
So: To Whit, As Promised:
The M134
Now, the thing of it is, the Mini has multiple components.  The 'gun' is one on it's own.  Then the major and critical subcomponents I'll be going over as well.  The components of the 7.62MM machine gun M134 are the rotor assembly, six bolt assemblies, six removable bolt tracks, gun housing assembly, rear gun support, six barrels, barrel clamp assembly or flash suppressor/barrel clamp, safing sector, housing cover, and two quick-release pins.
Some also include a flash suppressor/barrel clamp and top cover. As the rotor turns within the stationary housing cover, the bolt assembly rollers follow the main cam path of the housing cover causing the bolt assemblies to move along the accommodating tracks. Each barrel is mounted in the rotor assembly and secured by the barrel lock flange and barrel clamp assembly or flash suppressor/barrel clamp assembly in a fixed position in alignment with a bolt assembly. 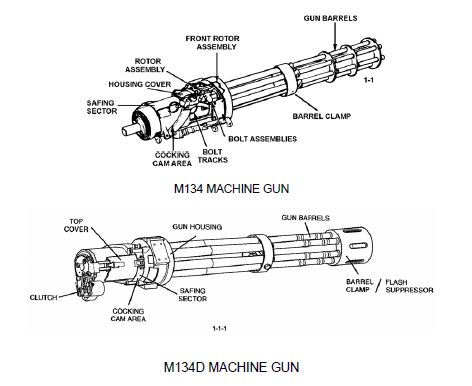 Then, the next is the Delinking/Feeder Assembly.
This's is the motor that literally feeds the beast.  The belt goes in, and brass and links come out extraordinarily quickly.  This gets attached to the mini by the means of a big assed quick-release pin.

There are two models, but the older one (MAU-56) is in it's end-of-life cycle.  Use til expended so to speak.  The quick-release pin and gear driven through the rear gear of the rotor assembly and/or clutch assembly. The feeder removes the cartridges from the links and feeds them to the bolt and track assemblies in the machine gun rotor. The links are discarded through the link ejection chute attached to the feeder. The spent cartridges are ejected from the gun and discarded through the spent brass ejection chute mounted on the feeder.  This thing needs 28 Vdc on a solenoid to power it, as it's powered (duh!).
Now, this also has another motor.  That needs it's own power.  There's 3 different models.
The newest is a 115 115 Vac, 3 phase, 400 Hz, dual speed motor.  The Operating Voltage 110 - 115 Vac
Steady State 15 Amp.   I leave this shit to guys like Phil.
The second is a bit different: 28 Vdc, dual speed, Operating Voltage 22-30 Vdc,  Amperage Range 30-40 Amp Steady State 40 Amp (slow rate max.) 75 Amp (fast rate max.)  This's a dual speed motor, but runs on different amperage to control the speed of the gun.
The third motor is the most common and the one that you see mounted on the very few privately owned M134s that're out there.  That's the Single Speed Motor.  It runs Type 28 Vdc, single speed, Operating Voltage 22-30 Vdc, Amperage Range 30-40 Amp
They look in order, like this:

OK
Now: Loading this thing.
Basically, it eats everything thats linked 7.62mm.
All flavors
Voraciously
1) Remove the Flex Feed
That's the feeder for the belt and prevents the belt from getting kinked when firing the weapon as the rate of fire is so insane.  The gun will not work properly without it.  You can use just about anything to hold the belted ammo, but without this, it won't feed worth a shit.  It connects to the Delinker Feed assembly on the bottom. 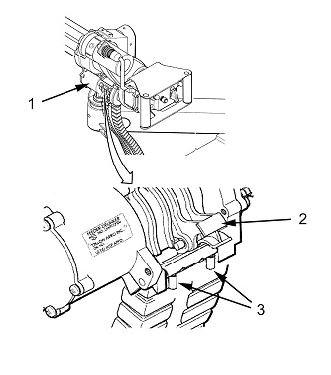 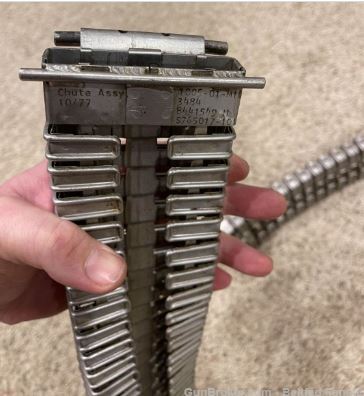 2)  Insert the ammunition belt into the Feeder Assembly, leave 17 rounds outside of the feeder.  These go inside the delinker.
4) Once the rounds are laid inside the delinker, rotate the barrels.
5) Rotate the barrels until ONE round falls out of the weapon.
6) Check the Belt for kinks, re-attach Flexible Feed
Now, bearing in mind this thing is literally electrically powered.  Which means battery powered.  Batteries not so good in bad times.  Also, this ain't humpable, unless yer Jessie Ventura.  And even then, he was firing squibs, not live rounds. 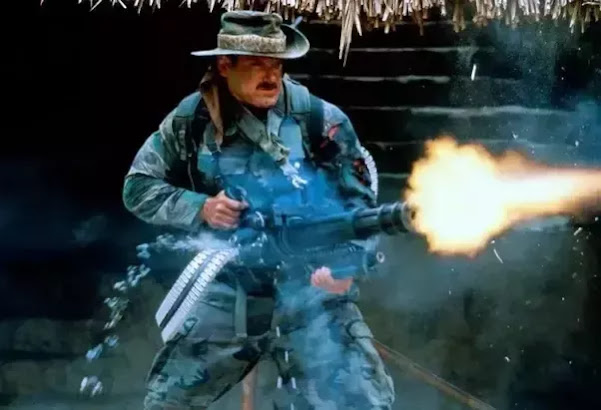 Still, impressive as fuck IMO.
Dunno if'n even I could swing a dick that big.
Now, the Grips...
They've changed quite a bit since I played with this thing.
The rear grips had a BIG RED BUTTON to turn on the power.  Arming Lever.  As seen in this picture below, it's still got it, and the fire button(s).  I'm not sure what the 'ammo' button is for, if'n I hanker a guess, it's to put power to the delinker without activating the bolts.  Didn't have that on the one I played with.  Same goes for the yellow RPM Indicator. 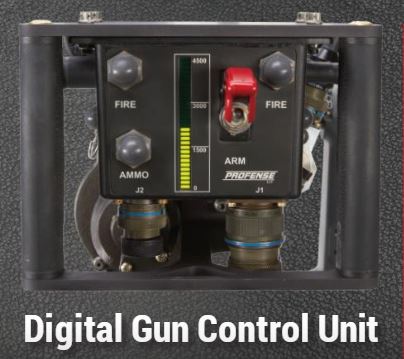 I'm getting old... they didn't have cool shit like that back then. 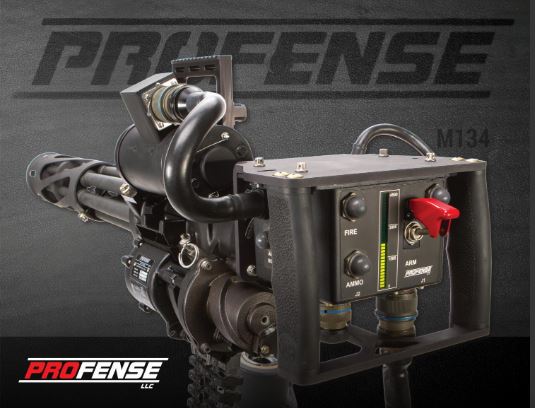 Also, this picture shows the layout.  Power into the Spade Grip Trigger assembly.  Power out to Gun Motor (top) and then power out to Delinker feeder assembly (bottom)
Closed circuit.  Won't work if'n they all ain't working.
Sorta like a County Road Repair Crew
Jes' Sayin'.
So... that's what I got for now... there's more, but it gets into the extremely technical side of things... timing, gearing, gearing up and down, and whatnot.  Anything I missed, well hey... Its been 10+ years and I'm going off of memory as there ain't no Dash ten, just the 23&P.  Hope y'all enjoyed.
Merry Christmas Ya Filthy Animals!
More Later I Remain The Intrepid Reporter
Big Country 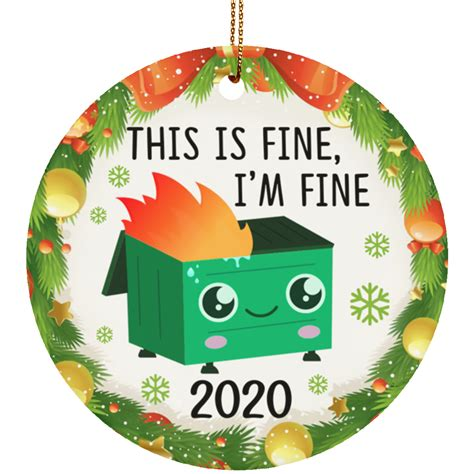