Greetings Me Droogs and Droogettes!
Gotta keep the mind busy or I'm tempted to mount up the Putt-Putt and head to Tennessee to burn the entire A.O. to the ground.  The "Good Ole Body" network is performing vast amounts of fuckery trying to protect the favored local son, you know.. the piece of shit wifebeater/bebebeater?
I'm fixing to git mah dander up if'n this shit ain't settled soon.
So in the meantime:
The Marine Corps M107A1, better known as "The Barrett .50 BMG"

Now, we all have a passing familiarity with this fucking beast mode weapon.
Half of us would sell a first born for one
That being said, let us have what you find on Page 2 of the Technical Manual for this:
“MY RIFLE”
The Creed of a United States Marine
By
Major Gen. W.H. Rupertus, USMC
This is my rifle. There are many like it, but this one is mine.
My rifle is my best friend. It is my life. I must master it as I must master my life.
My rifle without me is useless. Without my rifle, I am useless. I must fire my rifle true. I must shoot straighter than my enemy who is
trying to kill me. I must shoot him before he shoots me.
I will...
My rifle is human, even as I, because it is my life. Thus, I will learn it as a brother. I will learn its weaknesses, its strength, its parts,
its accessories, its sights and its barrel. I will ever guard it against the ravages of weather and damage. I will keep my rifle clean and
ready, even as I am clean and ready. We will become part of each other. We will...
Before God I swear this creed. My rifle and myself are the defenders of my country.
We are the masters of our enemy. We are the saviors of my life.
So be it, until victory is America’s and there is no enemy, but peace.
Gotta love the Jarheads... every TM about a rifle has that on Page 2. 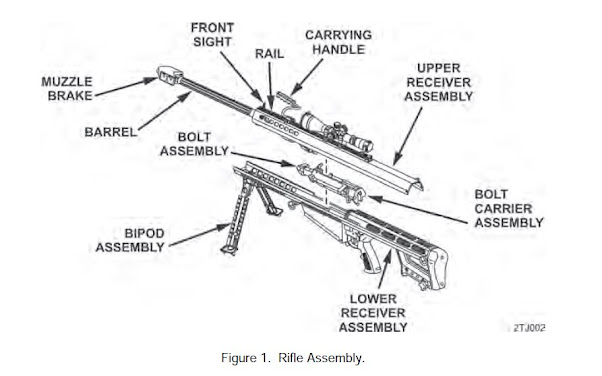 The Barrett .50 BMG (Browning Machine Gun) or 12.7X99mm rifle is designed for long distance sniping hence the LRSR designator.  Long Range Sniper Rifle.   Primary purpose is anti-material and vehicle use.  Mind you, the Geneva Convention states that the .50, you ain't allowed to shoot people with it, ya unnastand... however, as my DI taught me, belt buckles and helmets are equipment soooooo I hope that settles that lil issue on the Laws using the .50.
The M107A1, in it's current mode, is a 29-30 pound, recoil-operated semi-automatic.  It utilizes a 10 round box mag, and can fire all 12.7X99mm / .50 BMG rounds.  It's a bull moose of a rifle, with an effective range of 1800 meters... lil over a mile.  Some dudes have pinged motherfuckers with it going at 2 miles, but that's them.  Max effective range if lobbing rounds like artillery is 4000 meters...
The standard rounds that the M107 uses is as follows:
MK211, Mod 0, Caliber .50 HEAPI Cartridge, Green-Silver Tip, High Explosive Armor Piercing Incendiary
M33, Caliber .50 Ball Cartridge, No Color Tip, Standard Ball
M17, Caliber .50 Tracer Cartridge, Orange Tip, Tracer Round
M8, Caliber .50 API Cartridge, Black Tip Armor Piercing
M20, Caliber .50 APIT Cartridge, Black Tip Armor Piercing, Orange Dot for Tracer.
M1022, Caliber .50 LRSR Match Grade Sniper round, Olive Drab Case, no color tip.

The M107 uses the same M16 Pistol grip, and the safety (2) is the same.  The trigger is located at (1)
The weapon's magazine is loaded very similarly to an AK47, in that it's a 'tip-in-and-snap' motion to seat it.  Place the front of the magazine into the magwell, and rotate the ass end in til it clicks. 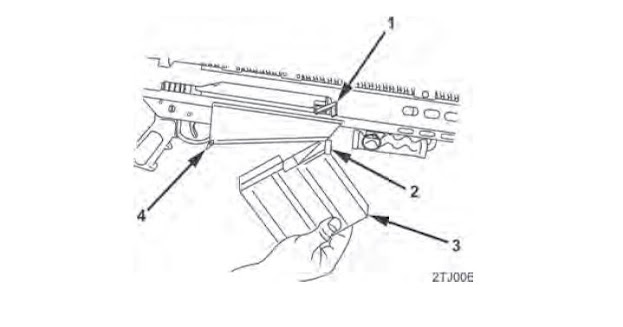 To fire the weapon, ya gotta charge the beast.  To do this, the bolt is racked hard to the rear.
Make sure the weapon is on SAFE

Grab the charging handle (1), and crank that fucker back hard, and release it.

Let it slam forward.  The bolt is a heavy motherfucker, and the spring tension ain't no joke.
Yer now ready to bring the pain
And there you have it.  Basic Operation of the Barrett.
Not common, BUT still... y'all might come across one now n'again...
So, been thinking:
Anyone interested in me doing a PodCast?
Sapper's been on me.  If'n I do it, it'll be short n sweet.  Got no use for these motherfuckers who drone on and on and on and on... Jes' Sayin'...
That and Also:  I have the ENTIRITY of the US dot mil's TMs and FM's here... Maybe make some copies and for S&H and a basic price I can make a copy?  It's an older copy (circa 2006) but it's got ALL the small arms in it.  Mortars, Rokkits, Rifles... hell even the TM on the M-3 Grease Gun.
Let me know what ya think in the comments
Also, MANY Greatful Thanks again to the donors: Steven, Larry and Chris.. Three Wise Doodz who showed the love and Shekels.  Much Appreciated!
So far, so good.
Dumbunny is fighting the Legal thing with Wifey.  Day by Day I suppose.
Be a lot easier if'n I had dusted that Dumbfuck a waaaays back when I had the chance.
Ah well
Head on A Swivel
Spicytime is -almost- here
More Later I Remain The Intrepid Reporter
Big Country 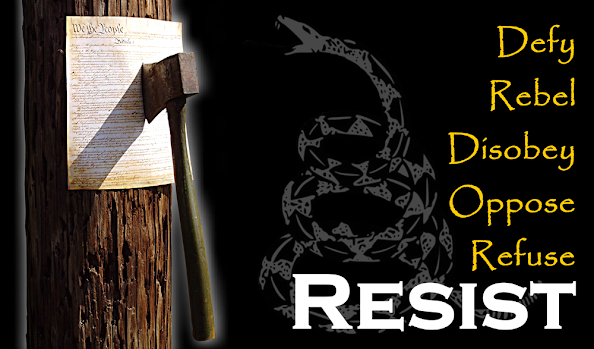 Posted by BigCountryExpat at 4:08 PM