Resigned and the M-18 Smoke Grenade

Greetings Me Droogs and Droogettes
<Le Sigh>
A pall has fallen on Ye Casa de Grande Campesino.
Anger, Check. Done.
Straight to Accepting.
There will be no negotiating
Ugh.  I'm now rallying the troops.
Activating people, places and things.
Meatspace time.  So little time.
It's now time to do "Patriot Shit" and honestly, maaaan I was hoping that shit would work itself out.  I don't see that happening now.  Fuckers just too stupid to understand that they wrecked the economy, they destroyed the system, they nuked the Republic from Orbit, and the next step is to rub it in our faces and dare us to do something about it.
OK... enough Moping
Sergeant's Time Saturday
Todays Subject of "Shit You'll See in the Battlespace"
The M-18 Smoke Grenade 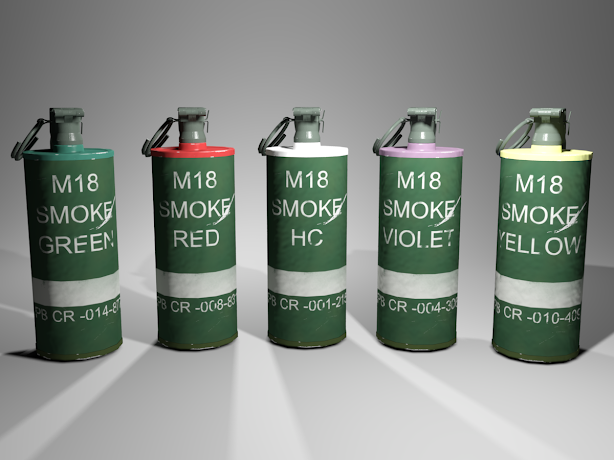 Smoke Grenades are used for concealment as well as ground-to-ground or ground-to-air signaling.  They're a bit larger than a can of coke, and weigh in at about a pound (19oz).  They have a standard pin-and-spoon ignition system.
Multiple colors as you can plainly see show -what color- each grenade is.
Now, the one most frequently used is HC White for concealment
HC stands for "High Concentrate"
Out of all the grenades in the smoke classification, HC white burns the longest and strongest.  It outside of red is the most commonly used.  These are the ones you'll most likely find laying around, either on the SWAT Teams or on the dot mil.  Red is the second most utilized as they use it to mark for medevacs.
All smoke can be used for marking, and if'n yer up against a force that has aviation support, and they pop a colored smoke on their own position OR they throw one right smack dab in the middle of your ambush, understand Air Support pain is prolly coming in, and at that moment, you need to either choose to get in closer to the smoke if it's in the middle of THEIR troops, or get the hell away from the smoke as they're marking YOUR position for the strike.  Either way, it's best if marking smoke pops, as shitty as it may be close with the enemy.  Mix it up fast and dirty so they can't call for fire on their own troops.  It's happened in the past, but not unless it's a wipeout sort of situation.
Now, for us, the purchase of Police and Military Grade smoke is nigh near impossible.  Believe me I tried.  Instead, I've found the Enola Gay paintball company does a -pretty good- ring pull mock-up of a M18. 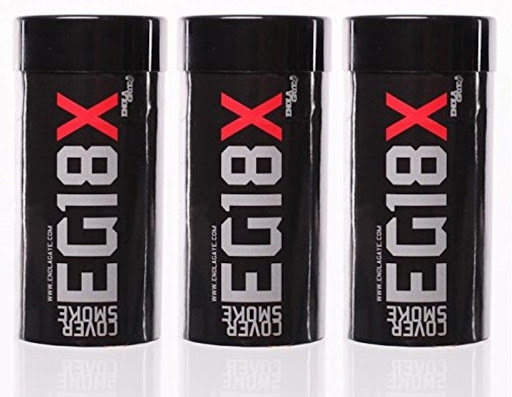 They're about as good as you can get in the civvie side.
Now.. another thing
We went over the M67 Fragmentation Grenade a few weeks ago.
Be warned and something I didn't cover but should have.
-IMPORTANT INFORMATION-
The M67 Grenade uses a M213 delay fuze which is the theoretical 4-5 second fuze
The M18 Smoke Grenade uses a M201 ignitor which goes off in 1.2 to 2 seconds
BIG. DIFFERENCE.
A favorite trick that troops used in Nam was to swap the fuzes on the frags and smoke.  That way when Mister Charles 'found' grenades on the battlefield and went to use them, they had a bad day.
So, IMPORTANT USER NOTE:
In Fragmentation Grenades:
Long = Good
Short = Bad 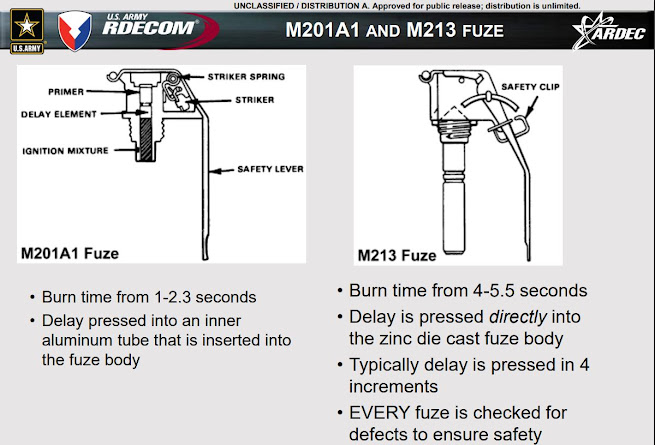 From the Army's own
So yepper...
Thats the way they want to play it
Game on.
More Later I Remain The Intrepid Reporter
Big Country

Posted by BigCountryExpat at 1:12 PM