Greetings Me Droogs and Droogettes
Back from Lunch and OMFG...  the trip to Tampa proper was well worth it.
Seafood on the Bay 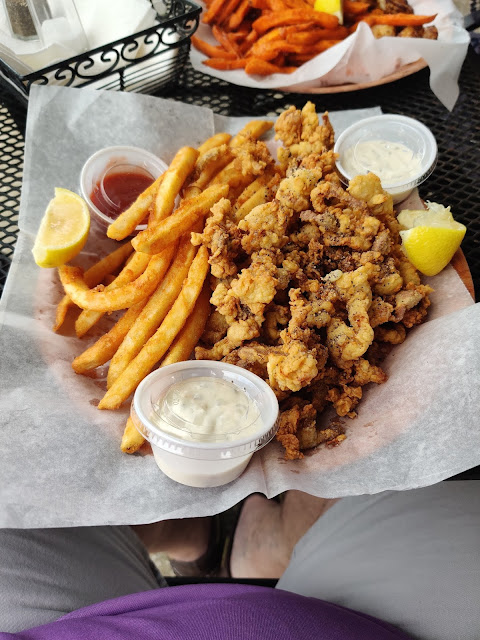 Calamari for an app
and then
Whole Fried Clams... imported from Ipswich Mass...
Holy Hell
I'ma died and went to seafood heaven.  See, I grew up clammin'.  Was one of the ways me and FedBro helped out in the summer with the vittles for MomUnit.  Loved to go clammin'... love to eat clams... steamers, fried... the whole thing... the best of the best.
And it's been since 2005 +/- since I had full on fried clams
The issue is you can get clams, just not whole.  Lotsa folks think the bellies are gross, and clam strips on they own are sorta like chewing fried rubber bands... especially if'n yer gettin' em anywhere outside of New England.
Place is Called "A Taste of Boston".
Wifey was, of course thrilled and her blacked Cajun shrimp was the bomb too.
Diet?
What diet?
I know not of what you speak.
So, little more on my poast on Namibian Hitler.  Seems the story's gotten more traction and a couple of the nicknames that popped up in one article had me rolling, thems being
"Soul Brother Hitler"
"Hip-Hop Hitler"
"Funkytown Fuhrer" (my fave)
and "African Adolf"
And one commenter mentioned that his name was misspelled.  I know the proper term/spelling is Adolf, but this guy is named Adolph... like the Coors lite motherfucker.  Seems besides not knowing history, his Dad didn't know how to spell none too good either.
So happy and fat(er) again
My self control issues are a bitch with good food.
Eat, drink and be merry.
Whew.
So yeah, a mellow Sunday
More Later I Remain The Intrepid Reporter
Big Country
Posted by BigCountryExpat at 4:01 PM