Greetings Me Droogs N Droogettes!
So, got some flack about the whole 'bullshit tranny' thing from the other day...
Cain't sez I didn't warn ya 'bout dis here place.  "It's mah house, and if you don't like it, getdafuckout!" as Eddie Murphy once said.  Rough neighborhood... if'n yer of a fainting type, I -highly- recommend that you lock the car doors going into MY motherfuckin' hood.
It is what it is.
BUT that being said... LOTS of people out there starting to 'wake up' on the entirety of the electoral bullshit-o-rama that's ongoing.

We have achieved what I didn't think possible:
Peak Bullshit
Apparently, the Late Great George Carlin said it right:
"It's a big Club, and you ain't in it"
Great man.
HIGHLY observant.
A quick aside... dunno how true it is, but after George cashed in, his daughter in an interview related a story that stuck with me.  Apparently his final wishes was to cremated and his ashes sprinkled on some creek that he loved in his A.O...
So, they took "Powdered Pop" out into the woods to lay him in the stream... and as they were doing it, all somber and shytte, apparently they heard -something- moving in the brush upstream... so they went to take a look.
Seems Smokey the Brown Bear was upstream...
Taking a big ole shit in the creek.
His daughter took that as a sign that George was fine -wherever- he was.
But I Digress per usual.
So, I've been hard on Aesop on his angle on the CoronaChan stuff...
All said and done, he's a medic, I'm just a combat medic.  BUT
He's got this one hard and fast:
"If someone is a politician or public employee in on the Big Con, from any party, at any level above deputy assistant dogcatcher, after the coup is fully enabled, they’re going to be a high value target.

Nota bene: I’m not calling for this. That’s just what happens. It’s inevitable.

If someone is enabling the coup and gaslighting the reality of election fraud, via anything from twaddling on tweeter, to reading the nightly ABCNNBCBeeEss propaganda, they’re going to be a target.

If anyone gets between the Coup and The People, to defend the former from the justified wrath of the latter, they’re going to find out what feeding their jangly bits into a wood chipper – slowly – feels like, and deservedly so. (Doubt it? Go watch any number of videos of Ukrainian riot police getting hit with a shitstorm of Molotov cocktails in their APCs, and subsequently toasted alive, and get back to the class.)

Those desirous of collecting any pension should stand down, stay home, or switch sides. No warning shots will be fired. And after the first one, the rest are free, and there’s no point in moderation once that Rubicon is crossed."
Nailed it.  Gotta say, nicely written (and yeah, I'm jealous)
He's dead on though, and the morons who're pulling this shit are blissfully unaware as to what's coming down the track.
They're Wile E. Coyote on the train tracks in front of the painted tunnel he just faked up to nail the Roadrunner.  He's all confident that dot in the painting isn't real, 'cause he just painted that thing on the wall a few minutes ago...
Can't possibly be backlash now could it? 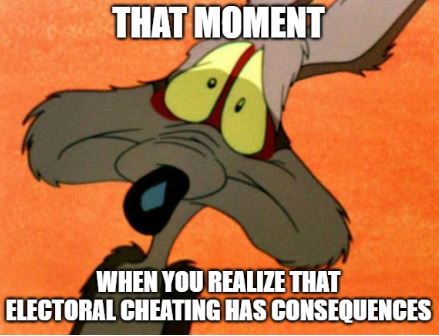 "And all of a sudden, the local Democrat Gauleiter and his family were all killed, and his house burned to the ground!"
Who'da thunk it?
'Cause thats what they seem to misunderstand.  They still think this's gonna roll back to "biddness as usual".  Hate to be the bearer of bad news, but it ain't.
Ain't -no fucking way- I spent as much time in uniform doing what I did for so fucking long to allow the scum of the fucking earth fuck over the entirety of the nation.
Hell most of these fucks never served in any meaningful capacity
Outside of their 'political service'
Which is, as we knew but the rest of 'Murica is waking up to, a fucking self-enrichment scheme
Politics is for sociopaths and grifters
NO ONE goes into politics for "The Greater Good" anymore...
Well... maybe... the "Greater Good" defined as filling ye olde wallet with geld and shekels.
There's also a good piece over at American Digest on where we go from here.
Not bad, BUT
Only if we can salvage this shitshow we have right now.
Which is depending on the next few weeks.
See, the Georgia Head of Elections or whatever the fuck that goonygoohoo motherfucker's title is... he's calling for Trump to "reign in his supporters" because "people are threatening violence!"  Uh, no shit sherlock.  Whaddya?  Fucked in ye head boy? OF COURSE motherfuckers are threatening to shoot yer stupid partisan asses. 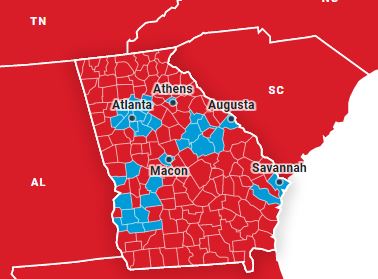 This map is from the county-by-county breakdown... seems to me that it, like ALL the states are dominated by the Urban Yoots and niggers of the "Free Shit Army." They don't make up the majority of your state.  In fact, I have a bit of trouble believing that the area around Savannah went Blue... that's Fort Stewart and ALL the veterans there...
But yeah, they're getting threatened because you fucked up
It's only a matter of time before the shooting starts.
People KNOW yer all corrupt...
Don't give a fuck what your 'intentions' were or are
“God save us from people who mean well.”
― Vikram Seth
“Most of the evil in this world is done by people with good intentions.”
― T.S. Eliot
“Hell is paved with good intentions.”
― Samuel Johnson
Gonna make one hell of an engraving on the Democratic Party's tombstone:
"We meant well."
Fucking Aye.
Fucking Oath.
Fucking Morons.
Period Fucking Dot.
As Billy Joel once sang about, "We didn't start the fire" but man,
We sure as shit'll extinguish it
Along with your entire family
That light in the tunnel is getting closer and you retards have -no idea-
More Later I Remain The Intrepid Reporter
Big Country 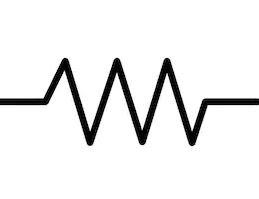