Greetings Me Droogs and Droogettes!!!
So, lets jump on the "Bash the Bitch" train and take a couple o'dozen cheap shots at Slo-Joe's other Ho.
Not the side bitch mind you but the wife 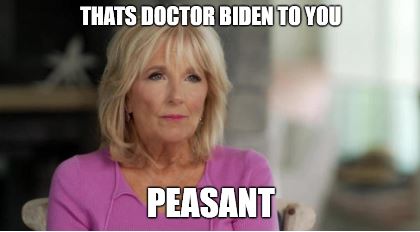 Yeah... Holy froo-froo and hullabaloo being made over her "title".
Jesus...
DeadDad had not one, but two I believe... EdD and PhD.  Both hard-earned and he was a full time teacher at a real college.  He was both deserving and had earned his shit.  This beeeeeatcha?  Got her 'doctorate' at the University when Slo was the Senator from that state, using a really weak-assed "How to keep kidz in skool" as her dissertation?
Puh-leeeze.
I got me a Doctorate in Divinity AND a Masters from some 'accredited' online outfit.
Don't see me calling meselves "The Right Reverend Big Country" now do ya?

Though I -do- have a preist shirt and collar (for gags) but legally?
It's legit.
Not that it is,  but it is.
Which tells you just how fucked the system is in toto.
Like not only politically, but educationally.
I really feel for the people who -genuinely- worked for their degrees.  My bro Popeye from the Army is working on his Masters right now and busting brain cells in the attempt while still being a cop.  It's 'get the degree or get out'... just like how it was in the Army... E-6 going to 7?  Better have at least the Bachelors.  If not?  No room on the promotion list this year... so solly!
Problem is, college was supposed to be a group of really smart people who, because of the love of the subject matter, continued their education.  NOT because it was a -must have- for a job.  (Unless it's in a HARD science where that shit matters)  In fact, judging from the type of people, the lack of critical thinking, and overall stupid that people in general are suffering from, I think it was someone on WRSA who posited that the best thing we could do right now, besides shooting all the communists, is plowing the elite colleges under, and salting the earth.
Hate to agree... my extended fam is deep in the Education side of things.  Lots of genuinely hardworking degreed folks.  Of course a lot of them don't have the common sense God gave a ground squirrel, but they try.  And what with the massive expansion of the Education biz, where everyone gets a degree, ultimately, there's only -so much- water one can add to the soup, before it's just water again. 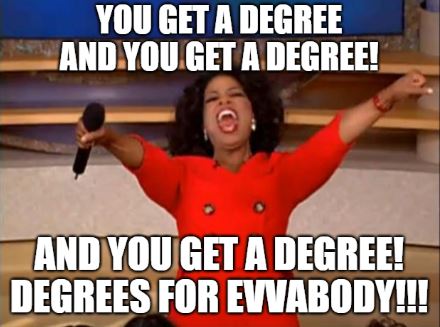 As it's been stated, the point to "Dr." Biden doing the "That's Doctor to you" is to establish dominance and social standing over the person to whom she's speaking with.  She knows it, we know it, but the Mob will never catch on.  Just another way the self-proclaimed Elites are being dickheads.
Again.
So, what with today, I'm watching/reading the news.  Not much shaking yet.  My favorite entertainment I'm seeing is the "Q" folks in meltdown mode.
Poor Bastards
Oughtta be an interesting few weeks.  Personally, I think Trump lacks the balls to order Martial Law.
Me?  I'd have scrambled to that already.  Martial Law, suspend Posse Comitatus, arrest everyone, Gitmo their asses, and hold new proctored elections in the states that don't pass the 'smell test.'  Elements of the 101st and 82nd to stand guard, and the first sign on shenanigans, shoot the fuckers and leave the corpse(s) on the sidewalk as an example to the rest. That's how to do a clean election.

I mean they've been calling him Trump-Hitler for four years?  Why not go out with a BOOM?
So, More Later, Shit's still fucked here.  Now we're in a custody fight with a convicted felon, and the court is so lazy, they awarded custody to the father, with a history of beating babies and his wimmenfolk
Man, this system can't burn soon enough for me
I Remain The Intrepid Reporter
Big Country 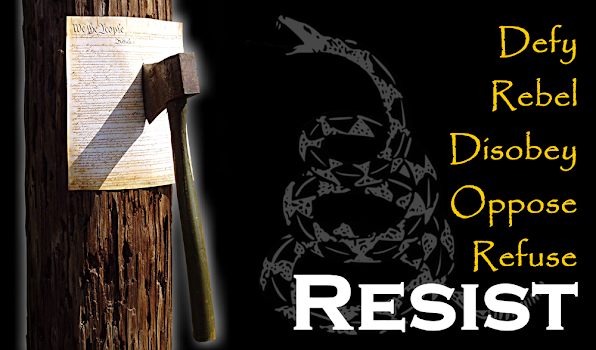 Posted by BigCountryExpat at 12:48 PM