Greetings Me Droogs and Droogettes!
A few questions, here and on the Email 'bout heli-oka-lopters.
Specifically:
How does one incapacitate one? 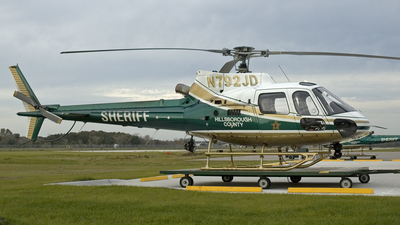 The new standard for helicopters for the fuzz here is the US is the Eurocopter AS350.
In the pic above, notice the Forward Looking Infrared Receiver (F.L.I.R.) pod.  That's the 'sees in the dark' like Sauron toy.  Some even have thermal capability.
Best bet?
On the ground sabotage.
KD Ranges.
Fragile AND expensive
Now, the AS350, also called the "Squirrel" (no joke, that's the frog designation) has a rep for being really fragile apparently.   18 Major Crashes in 10 years.
Guess it's similar to a 737 MAX eh?
I wouldn't fly on one.
Stolen shamelessly from -somewhere on the web-
"The tail rotor is critical for stability in the air, but it’s generally made of light and vulnerable materials such as fiberglass and hollow aluminum. If a bullet were to strike it in the right place, one of the propeller blades could break off, throwing the craft into a spin. (Even a stray article of clothing can get sucked into the tail rotor and down a chopper.) But the tail rotor is a small target, so you may be better off shooting at the cockpit, in the hope of disabling the pilot."

"A helicopter is a delicately balanced machine with much of the mass concentrated in the engine. When the main rotor above the cabin spins, the whole craft has a tendency to spin as well. That’s why there’s a second rotor, placed on the end of the tail, to apply a counteracting torque to the body of the helicopter. The tail rotor’s efficiency is maximized by placing it as far away from the main engine as possible—the greater the distance between the two, the more torque the rotor can generate. At the same time, the tail rotor can’t be too heavy (or sturdy), since a long and cumbersome tail would make flight impossible."

"The main rotor is much bulkier and more likely to withstand a bullet. It often contains steel and brass in addition to solid aluminum and fiberglass. During the Vietnam War, Huey pilots used their heavy main rotors to trim trees around tight landing areas. Even if a gunman were able to damage a main rotor blade, that wouldn’t necessarily prevent the helicopter from limping to safety. Likewise, it would take a very lucky shot to completely disable the engine or to strike a critical hydraulic line on the body."

"A pilot has a couple of options when the tail rotor is disabled. If the helicopter’s forward speed exceeds 40 mph at the time of the incident, the vertical surfaces on the body can stabilize the craft and prevent a fatal spin. The pilot can steer by manipulating the engine speed and the pitch of the main rotor blades. Then he or she can come to a kind of skidding stop on the ground, known as a “run-on” landing. If the craft is hovering when the tail rotor fails, the pilot can disconnect the engine from the main rotor. Air rushing upward would turn the main rotor (called “autorotation“), enabling the craft to make a controlled descent. This maneuver must be commenced before the helicopter begins spinning. Both the run-on landing and emergency autorotation require enormous skill."
So yeah...
Fragile and expensive birds
YMMV
Just remember the Iraqi Farmer who at Karbala shot down an Apache with one shot 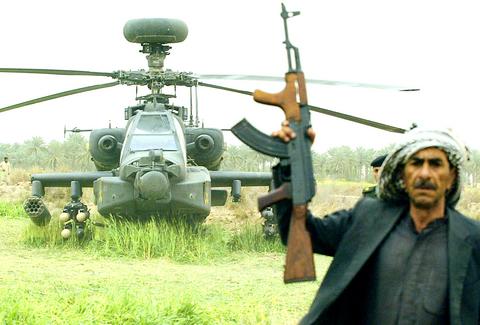 Sometimes luck plays a part
But better than luck is skill
Or a combination of both
Me?  Been rather lucky over the years, to the point I wondered if the "Luck Well" is gonna eventually run dry.   Not that I'm worried.  I look forward to death.  Provided its a good and meaningful death.
I don't want to go to the Cold Lands
We shall see though.
Spicytime Cometh
Sooner and sooner
More Later I Remain The Intrepid Reporter
Big Country