Get Strapped or Get Clapped

Greetings me Droogs and Droogettes
So, todays last minute fun n' games is Personal gear layout.
Now... each person has their own preferences.
I -try- to go light but muddafukka... Da shit starts getting heavier and heavier.
Add on armor?
Oh my aching spine.
Any Wonder Why (AWW) I've had three minor and one major spinal surgery?
Now, Pic #1 is my front plate layout: 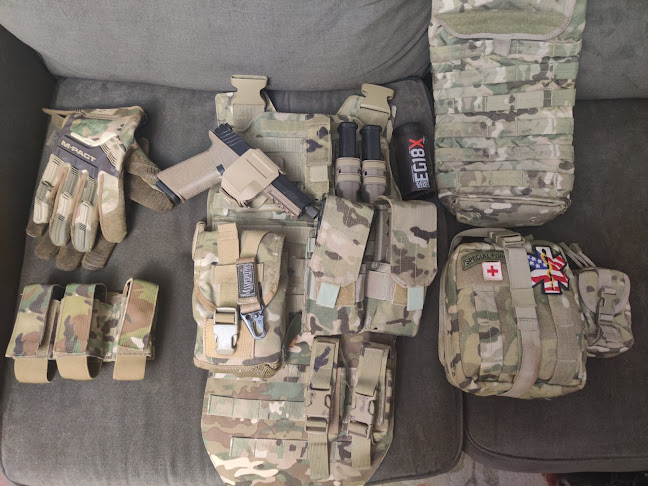 A gen-you-whine Blackwater Plate Carrier.
Rarer n'Fuck actually.  Really Good gear if you can find it.
Got a Russian OMAN Shell with US soft Armor Crotch Blankie hanging off the bottom, giving it that 'extended look'
Other Gear, Top Left and across:
1) Mechanix Multicam M-Pact work gloves.
2) The Grock that you watch me build in a Crye Precision GunClip
3) Illum pouch...OPS brand Airsoft pouch
4) 1X 'Enola Gay' EG-18X Black Smoke... airsoft but as good as I can get civvie side (more on the airsoft in a bit)
5) 2X Grock Mags in Quick Pull friction lok holders
6) The LONG assed pouch is the water Buff Camelbak, with integrated water filtration .02 micron supposedly.
Then onto the left again:
7) 3X 37mm "Dragons Eggs" loaded in reusable 3.5inch hulls.  Thankfully I got a full brick of 1000 M209 Primers to reload 'em with.  Thats a Blackhawk Holder that gets strapped to the cummerbund straps on the left side
8) Admin Pouch.  US Army Multicam Canteen cover.  Got all my 'fiddly bit' like spare batteries, compass and 'other shytte' in it
9) 1-4 Mag US Army Duplex Mag pouch.  4 mags, two hex, two magpul.  Might need to DX it soon as its really worn out as one of my "Iraq World Tour Original Pieces of Gear"
10) MOST critical: All-in-one Aid Bag crammed with shit.  And yeah, that -is- bloodstains on the strap and bottom where it fell into someone's shit when I was workin' on 'em, in a land far far away...  Gets put on the right side of the cummerbund.
11) Small Radio Pouch for Comms Unit... and no -ain't showing- mah comms.  They're called secure comms for a reason
12) Lastly, on the crotch protector, two OPS pouches, one ka-niff and one leatherman
Everything else is cool OPSEC wise
Especially since I transition my gear damned near constantly LOL
I'm like a chick... can't decide which loadout I want for what day
So, to some specifics: 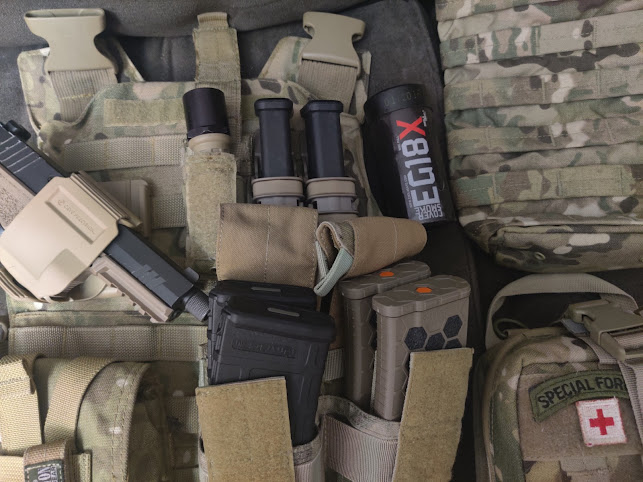 3 Grock Mags, total
5 M-4 Mags, total
Yah, it's war
But, in theory
We're skirmishers
Terrorists
Strike Hard, Strike Fast, Fade into the Background..........
Rollin' 'hawt n heavy' like it was "Fallujah 3: Shit Just Went South" means MOR weight and MOR bullshit.  Les'n yer Jesse Motherfucking Owens crossed with Mike Tyson, ain't no way yer gonna need MOR bb's than that.
In fact, if you do find yourself in that position, then something, somewhere, has gone terribly, terribly wrong.
Food for thought
Then, part of my rationale for two different Mags Brands?
Keep 'em thinking.
Odds are in your excitement you might lose a mag... evidence is what the Fuzz call it
Multiple brands, knowing the 'usual suspects' like to stay 'brand loyal?'
Mebbe more than one-two-three shooters.
In fact, I have some "My Lil Pony" (Colt) 'Nam Mags... older, but like new, and still in the wrapper.
Drop one of those intentionally, and like my MRE brief, send the intel squirrels up a potential blind alley.  Moving on: 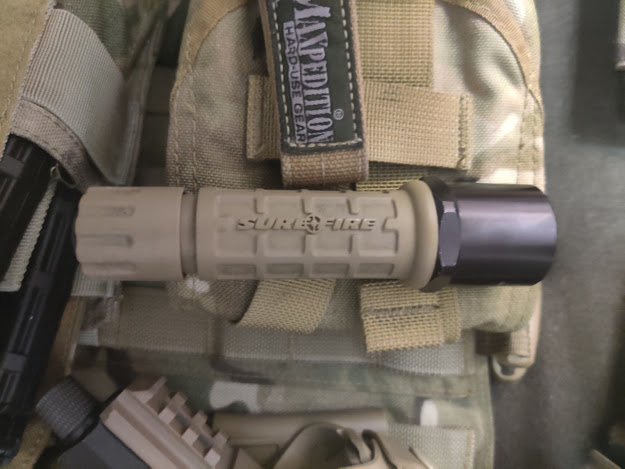 Flashlight.  Do yourself a favor, spend the money.  Lifetime warranty, which is why mine is two tone.  The Tan plastic lens in the front got smashed in something or other, so's I emailed Surefire who, at the time said, "Sorry, we're out of the plastic FDE front but here's a metal comparable front, and BTW, here's a better lamp as a 'we're sorry."  Now?  I purely love it.  Had it since 04, and it's been to hell and back.  The black part gives it a kind of character.  Rides in an OPS airsoft pouch.
Then 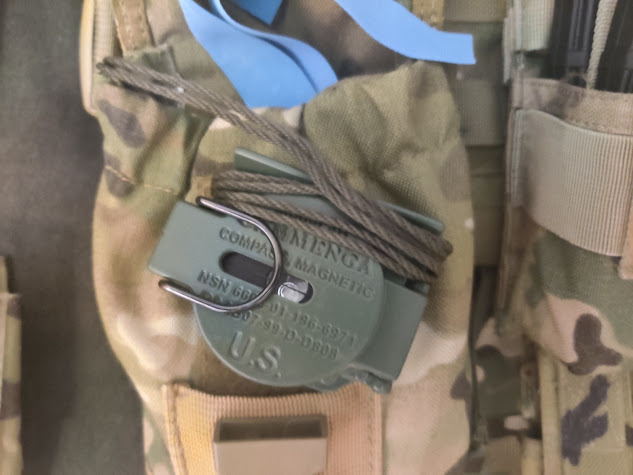 -real- Cammenga Tritium powered Mil Compass.
If'n you don't know how to use one, Learn.
Get Mil Grid Maps for your A.O. and areas of interest here
Also, you'll need a protractor from here
Must Learn-Must Have gear (and no kickback for me putting this out, tho it'd be nice LOL)
Then, the 37mm 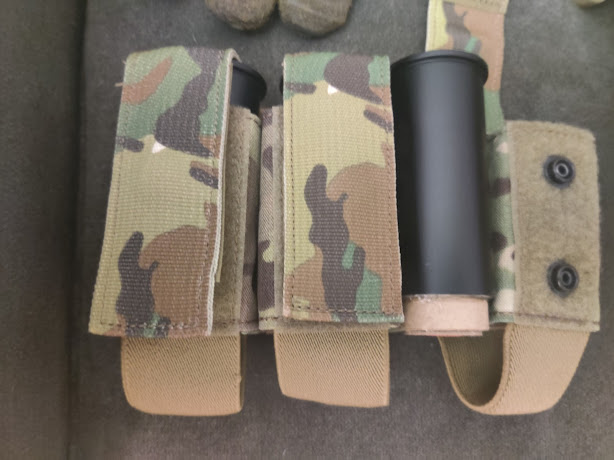 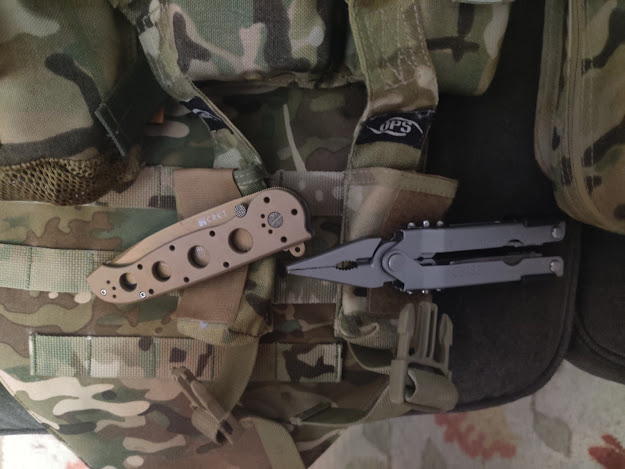 Lastly, more importante toolage.  a good CRKT Folder, and a leatherman... I know, it's a fucking gerber, but old habits and names die hard.
Now, for those who want to rage and bash on Airsoft pouches.
Let me tell ya, those OPS pouches have been with me, in real combat for years.  Specifically since the end of 06, early 07.  The coudura is still good, and well as the clips and locks, nevermind the velcro.  Like. Fuckin. New.
Lots better than some other supposed high speed brands that cost a fuckton of money (coff coff -tactical tay... something...had a couple of failures on their shit...)  So, YMMV but me?  I ain't a geardo-snob.  I take and use what works... literally have 3 footlockers filled with 'shit I didn't like/didn't work'.  Should prolly look into selling it, but I'm, as you've seen, pack-rattish.  That and I can probably equip 4-5 guys/gals with medium-to-heavy armor and weapons, expanding the security squad if needed.
Then, the Smoke:  Can't get (within reason) genuine M-18s... not without a law enforcement letter, and my Contractor I.D. ain't cutting it these days.  If someone knows/can source 'em, great.  Let me know... especially if they're less than $40 a throw... I ain't made of cash.
That being said, these EG-18X?  For $15?  Oh fuck yeah.  They seem to be perpetually out of HC White, the X in the name being a trade of of HC or "High Concentrate" smoke.  Black and other colors work, but black I like... at night it'll double the effectiveness methinks.
That and Sapper n me done fucked up the other night...
Got an online home-made smoke recipe... uses sorbital and potassium nitrite? Trate? fuckitall.  Mixed up a goodly amount, put it in a fuzed container and went to the back yard.  Lit it, and did the "Run Away! Run Away!" in case it went to "Pipe Bomb" instead of "Smoke Grenade".  Did I mention I was using one of those aluminum disposable energy drink bottles with a nice screw on cap and seal?
Oops.
It didn't do either.
Apparently the 'smoke holes' I drilled in it and taped over per instructions?  These allow the smoke to go out and burn thru the tape, allowing the smoke to propagate?
Guess I didn't make 'em big enough.
When I was a kid, we had this really fucked up firework that we called a "Niggerchaser."  Put it on the ground, light it, and haul ass as you didn't have ANY idea which way this thing was gonna go... started spinning and sparking, and suddenly lifts off the ground and shoots like a mini-rokkit 'cross the yard, to end up with a >KABOOM<
Yeah...'bout that....................
This time, imagine an aluminum hulled (thin but still) 12 liquid ounce "Niggerchaser."  ...That weighs like a pound +/-.....
Lit it off, and it started spinning to beat the band... Both me and Sapper screamed, damned near simultaneously:
"OH FUCK!!!!"
as it lifted off, smoking to beat the band...
...like a fucking V2 out of control...
.....and across the street at warp speed to take out a chunk of my neighbor's front porch facade.
<Le Deep Sigh>
Talked to Barry.  He found it more hysterically funny than being upset.  He gets a kick out of my 'schoolboy antics' as he calls my High Explosive and Flammenwerfer experiments.  "No harm no foul bro!"
Cool dude, even tho he voted for Biden.
So yeah, the loadout of the gear?  Personal choice rules the day, but remember the key takeaways:
Too Much is Too Much.
Doesn't do any good to anyone or the mission to show up a physical wreck.
Not Enough is Not Enough.
Make sure you have enough shit to do the Op.  No 'lines of supply' for folks like us.
Know Where ALL your Shit is.  Memorize that Shit.
Don't want to be grabbin' a battery or radio when you need a bandage or tourniquet.
Have Alternates.  Learn your Gear.  Get Comfortable in it.
I wore my shit, lived in it, slept in it.  Did it the other night just to see if I still 'had' it.
I did and still do.  Wifey thought it was weird but fuck, I gotta be in training.
Have a Second Set. (If possible)
This's just my "Medium Battle Rattle"  It also has, (not pictured) the shoulder soft armor gauntlets/epaulets, and the back plate carrier, as well as the lower spine kevlar hang-down.
I have 3 other sets, Light, this, Heavy and then what I call "EOD" level.
That's for the "Holy fuck 'Call of Duty: Modern Warfare 2' Mode"
Yeah
Pack Rattish
Only thing I've sold was a pair of XSAPI mini plates I had that I couldn't use.  My son, when he was 6-10, they fit him, but now?  Might make a good super-heavy Codpiece. Actually sold 'em to someone who's a regular reader and was tickled to know he was buying from the I.R.
Myself, OK... here goes...
There's
SAPI
ESAPI
and then, the hens teeth
XSAPI
XSAPI are the final "God Level" armor the Army came up for VIPs and other HVTs.  at $3200 a plate they're beyond rare.  Not sure, but my unnastanding is they never off-fish-shully got issued.  Me being the Master of the Scrounge, I got 2 XL Brand New ones.
Supposedly made with Tungsten Steel and as strong as Chobham Armor... I know it'll defeat -ALL- Armor Piercing ammo.
I don't even have soft armor in the carrier.  Might rectify that, but my other armor(s) have that covered.  Hell, those plates when bought new, cost more than my car....
Times 3.
So... Gotta git.  Been a good day, but Wifey wants company.
More Later I Remain The Intrepid Reporter
Big Country

Posted by BigCountryExpat at 9:20 PM