Greetings Me Droogs and Droogettes
Grinding ye olde thinking meat, and I'm starting to see the "Great Grift" of 2021 coming into position.  We all see the fact "Biden Incorporated" stole the election.  It was a selection.  Not a legit election.  And they've been rubbing our faces in it like nonstop, almost daring us to do something.
Part of the reason is such a high percentage of the people, as a whole, surrendered like all of their rights to the government, both state and local and allowed them to transfer all of our wealth to the ruling elite, when the government "PANDEMIC!!!" and then said “trust us.”
Believe in the Science!!!! 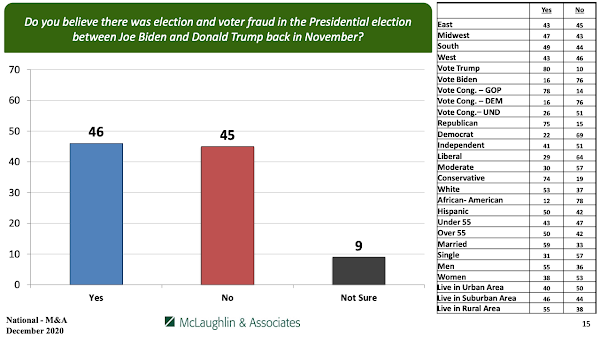 This's the most recent polling... fully 46% think fucking shenanigans happened
Not that the Ruling Elite give a shit
Which is a fuckup of EPIC PROPORTIONS
Obviously, they STOLE the election, so they can’t do a full bore investigation into whether or not they stole the election – but they could just as easily have pretended to give a fuck.  I mean C'mon Man!
Now, not all the people would be convinced, you can bullshit most of the people most of the time, but this?
Nah brah.
Ain't happening.
BUT if they at least gave some lip service to "Investigating" or "Holding off on transition til we iron out this issue" might have worked  It would have cost the dumbfucks nothing to do this. They obviously have total control over the enemedia and the state and localities in question... hell, they even apparently own the Chief Injustice of the Supreme Court, so there was never any real threat that the election would actually be overturned.
But they keep punching down on Orange Man Bad and his "supporters"
Problem is they're stupid
We know this
We get this
But
Inbred Elitists don't understand what this's REALLY about... they're incapable.
It's all about "Winning" and "Losing"
Not how the game is played
IDGAF whether it's Orange Man Bad who won or not... if it'd been a ham sammich that got robbed of the vote, it's the fact that the stole the vote...NOT TRUMP
That righteously pisses people off
They. Don't. Get. That.
They'all done fucked up by the numbers
They keep thinking in terms of "Our Guy" versus "Their Guy"
They don't get we're pissed off that they pissed on the basic framework of the country.
And our guys?
We, for the most part make up 18 million Combat Veterans
Accounting for say, 5 million vet-tards, phaggots, morons, the soft-heads and the braindead brainwashed who're batting for Team Socialist Buttfest, we're still in the majority here 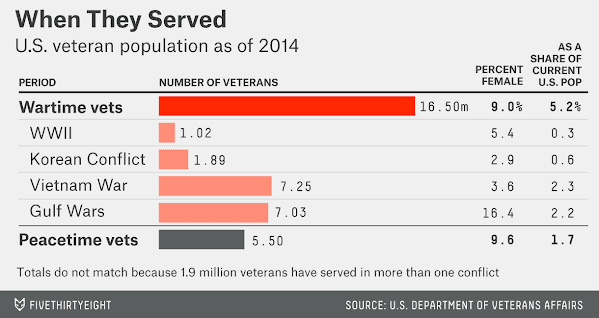 This's from 2014... lots more since then, and less of the WW2 and Koooo-rean war :(
Right Wing Death Squads?
Hoo Boy
Let me tell ya... as far as I'm concerned, the term "Genocide" was coined to explain what happens when the Whypeepoo get really pissed off.
It -does not- end well for the target of that Ire.
So...Predictions:
1) Slo Joe will get installed, Probably goes after Russia to keep shit too stirred up for regular folks to GAF about the happy horseshit.  Manufacture a good crisis to wag the dog. (hint: it's already starting)
2) Media'll go apeshit, keep hammering Orange Man Bad, insist on trials and bullshit for supposed crimes.  First time they-ever- go after a past prez, setting an ugly precedent mind you...which also indicates to me that they're not ever worried about being out of power, because backlash -does- happen, but  they ain't worried about it.  I'd give O a 50-50 odd at surviving this at this point...
3) MK-Ultra Pre-Programed Kill-bot or whatever they call the dupes who do that shit'll go on mass school killing spree.  With an AR
4) Hunter Bidet ends up dead, Orange Man Bad gets the blame
5) Slo 'retires' because BadSon is D.O.A. Leaving Insane Kneepad Cocksucker in charge (IKC has a nice ring to it IMO donit?)
6) Guns get outlawed
7) Weed gets nationally legalized... interchangeable between the gun ban... which comes first?
8) REAL resistance starts
Just my 2 cents, which I dunno if they even make pennies anymore
But make of it whatcha will.  More Crew Served Goodness on the Horizon
More Later I Remain The Intrepid Reporter
Big Country 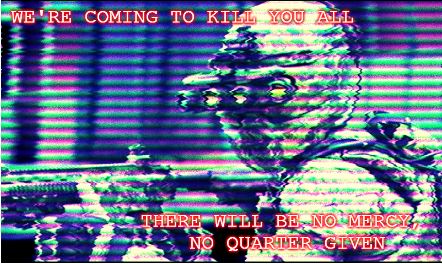