Morning Me Droogs N Droogettes
OK... I'm barely here and haven't really looked at the news.
Don't want to really.
It's obvious that we've been moved to the final "box" in our 'option tree'
We've run out of boxes...
We're down to one... 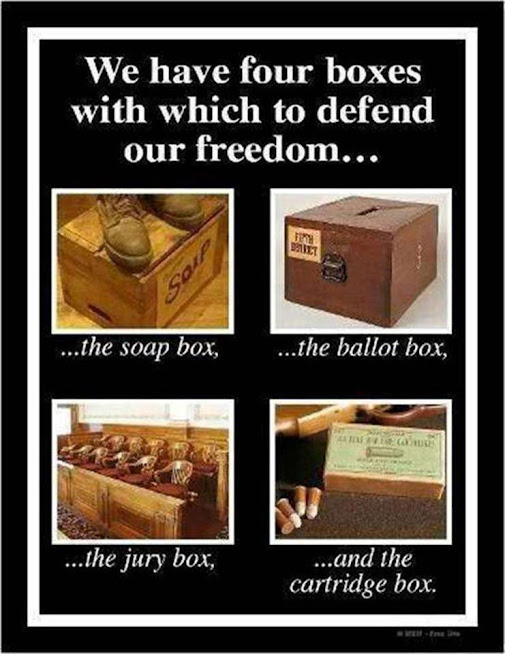 May as well put a big ole "red X" on 'soap,' 'ballot' and even 'jury.'
We're left with one box
Dammit.
I, for all my hyperbole, really didn't want to go this route.
I'm old man... got my "Been There, Done That, Got the T-Shirt" shytte of the whole civil war thing in Iraq... In fact, talking to Sapper last night I told him about the Iraqi 'purple finger rule' and Voter ID over there... Fucking Iraqis, with a blown the fuck out country still managed to hold a relatively honest election.  To prevent fraud, the Iraqis hadda show a fucking ID.  No excuses.  After they voted?  Dip the finger in indelible ink... purple was the color if I recall...   Here?  The race hustlers here talk about 'voter suppression' and 'racial discrimination'... let me tell ya, if'n, in the Year 2020, you ain't got an ID, then you're either too stupid or worthless to be allowed to vote.  Don't tell me otherwise.
No ID = No Franchise.  Fuck the fuck off.
I really don't want to have this happen.
But... they even took the Jury Box away.
That leaves violence.
Arizona's got the right idea.  They're armed up and telling them to make sure the votes are counted... Trump was up bigly, and they stopped counting as they 'found' more ballots.
It's happening everywhere.
I mean let me ask you...
How is it that Grandpa Stinkyfinger, the lowest energy candidate in history get MOR VOTES than his old boss, the Big Nig the Obamamessiah in 2008?
Answer: It fucking ain't.
Which means it's time for theoretical reprisals IF they take this shit through fraud.  Identify the vote counters.  Don't care if'n its a 75 year old Grannie or a Mother of 5 who lives up your street.  They are enemy operatives.
Burn them out.
Quite literally.
Midnight Democrat Style Terror tactics.
Meatspace Baby.
And if I get hemmed up and disappear?
Don't forget the brilliance of "The Hundred Head Coup" that the late great Mike Vanderboegh wrote of HERE   For each one of ours, take 100 of theirs.
Remember your Solzhensynizen:
“And how we burned in the camps later, thinking: What would things have been like if every security operative, when he went out at night to make an arrest, had been uncertain whether he would return alive and had to say good-bye to his family? Or if, during periods of mass arrests, as for example in Leningrad, when they arrested a quarter of the entire city, people had not simply sat there in their lairs, paling with terror at every bang of the downstairs door and at every step on the staircase, but had understood they had nothing left to lose and had boldly set up in the downstairs hall an ambush of half a dozen people with axes, hammers, pokers, or whatever else was at hand? After all, you knew ahead of time that those bluecaps were out at night for no good purpose. And you could be sure ahead of time that you’d be cracking the skull of a cutthroat.”
Watch your six
Head on a Swivel
Avoid Crowds
Intel Intel Intel
Be the Gray Man
Avoid Crowds
Until Later I Remain The Intrepid Reporter
Big Country
Posted by BigCountryExpat at 8:52 AM