Greetings Me Droogs and Droogettes!
Today's Saturday, so we'll call it "Sergeant's Time Saturday" from here on out.  Now now, I -know- Sergeant's Time was is? (dunno if they still do it) but it was when I was in the green machine a time in the unit that the day was spent without occifers, doing Basic Training Shit.
C.T.T. or Common Tasks Training.
Every Wednesday.  In the Infantry, we'd start off with an early morning roadmarch, rain or shine.  5 Miles was the norm with a full combat load.  (40+ pounds of bullshit).  Then, after we got to where we wuz going, we'd either stop and begin 'basic training skills' like donning, wearing and working in M.O.P.P. 4 (ggas mask, chem suit and alllll the other bullshit) and other skills like mine emplacement, or something as such that were basic soldiering skills that we needed to keep up on.
So, today, with keeping that in mind, I figure that because of the upcoming 'spicytime' going over a piece of basic kit that we used.  The subject for today is the M18A1 Claymore Antipersonnel Landmine 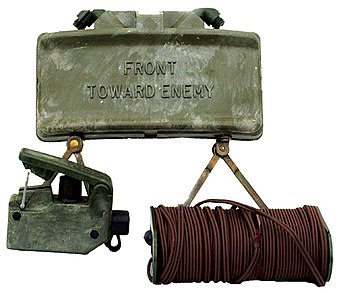 So, some historical background:
Dude name of Norman McLeod began developing his mine in 1952 into the T-48 concept and was presented to the US Army. The Army liked what is saw and accepted the design (with some modifications) into their inventory as the "M18". The M18 was evolved into the M18A1 after 1954 to fulfill a Picatinny Arsenal requirement for an improved form.

The M18 Claymore anti-personnel mine was developed into two distinct versions - one with a peep-type sight and the other without. The peep sight was devised to help give a Claymore operator a "field-of-vision" for the semi-circle blast pattern presented by the M18 when detonated. A training version is noted by its bold blue color whereas operational M18s have an Olive-color appearance. 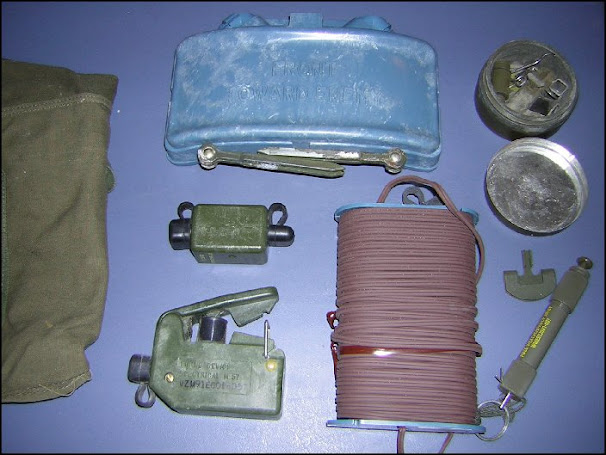 The mine component itself consists of a plastic case that is concave and rectangular in shape. Along the "active" side of the case are the embossed words "Front Toward Enemy" while the rear is embossed with "Back" to help keep the operator from making a lethal mistake during setup. The plastic component contains a composition of C3 explosive. The concave nature of the mine's design allows for a forward blast area that produces a fan-shaped pattern of steel balls across a horizontal arc of approximately 60-degrees. The steel balls packed within the mine are then projected out from just above ground level by the resulting explosion to a height of about 2 meters with a maximum kill radius of 100 meters and an effective kill range of 50 meters. Wounding has been noted as far away as 270 yards from the blast zone though a range of 55 yards is deemed optimal. As can be expected, extreme professional care should be taken during the set up of Claymores. This is not only do to the mine's inherent explosive nature but the fact that up to 20% of the internal steel ball projectiles can blow back towards a friendly line upon detonation. As such, common practice for M18 setup includes the use of natural earth mounds or hills positioned behind the Claymore to help eliminate or reduce such friendly-fire incidents.

The detonation of a M18 Claymore systems is by way of an electrically-actuated firing device issued with each mine.  The M57 device (known as a "clacker") is held in the hand and features a trigger that is squeezed a number of times by the Claymore operator to convert mechanical energy into electrical energy using an armature and magnets. The M18 can still be detonated in the electrical or non-electrical fashion which lends herself to be used as a dedicated mine or as an "individual weapon". In fact, so long as the operator can find a way to actuate the blasting caps, the M18 will trigger.

The M18 Claymore system is roughly 8.5 inches in length, 1.375 inches wide, 3.25 inches high and weighs just 3.5 pounds. 700 steel-based sphere ball bearings (10.5 grains) are used as the projectiles, set within an epoxy resin, and a 1.5lb layer of composition C-4 explosive is used for detonation. Detonation is initiated by a No 2 electric blasting cap. 4 x 6" spike legs are attached to the bottom of the M18 Claymore system to allow the mine to be easily secured into soft grounds. A bandolier is issued for the carrying of M18 Claymores and also contains an instruction sheet.  That sheet is here: 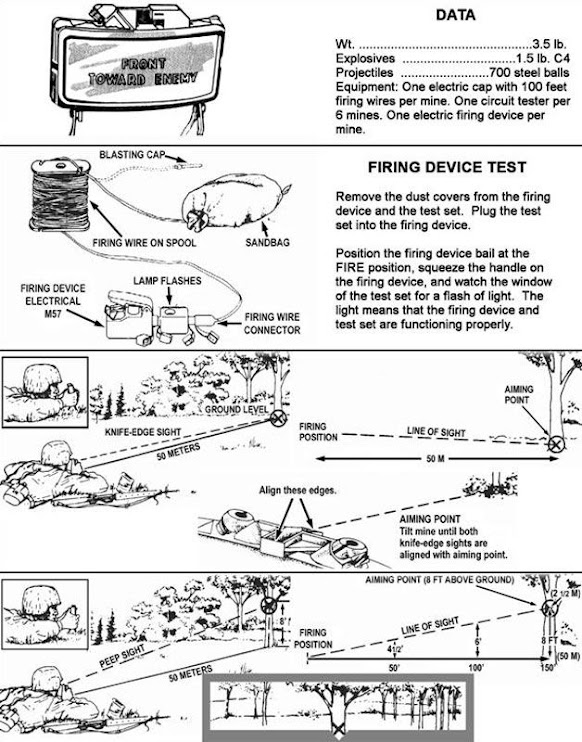 So yeah, a nasty toy for fun times.
Here's a home-made expedient one that you can make at home:

Along with a how-to for a tripwire detonator:

All available on Home Depot or Amazon.
Definitely a means to keep the bad guys on their collective toes AND great for deploying around su casa, as the 25-50 meter standoff can be that 'edge' you might need in a full on uncivil war.  Let me know if you found this to be helpful, and don't forget to ping the tip jar.  I missed a full week of work dammit!
So, More Later I Remain The Intrepid Reporter
Big Country
Posted by BigCountryExpat at 2:38 PM