Greetings Me Droogs N Droogettes!
As -everyone- at this point knows:
STAY AWAY FROM CROWDS.
Yeah...
Lest you end up like this poor guy: 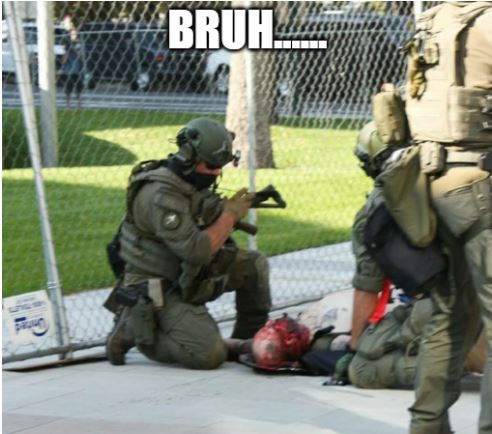 That's -not- going to buff out.
That's a full on Glock-19 hollowpoint.
Delivered by... drumroll please...
A Pinkerton Detective Agency person hired by the media as security.
That's a big deal.
The Pinkertons, historically speaking, have been the bully-boys, murderers, and strike-breakers for the elite since their inception.  How odd is it that the guy who gunned down a, for all intensive purposes unarmed police and Trump Supporter by an agency which, historically, has supported the Elite crushing the "Little Man" under their heel to further the Elite's Agenda?
Goolag it.  Goolag "Pinkertons murder innocents" and whooo boy it brings up a bunch of historical times, that, at the behest of their corporate Masters, they killed Men, Women and Children to either enforce or push through some insane corporate edict.
So... to recap:
Dude slaps the paint offa ole boy. 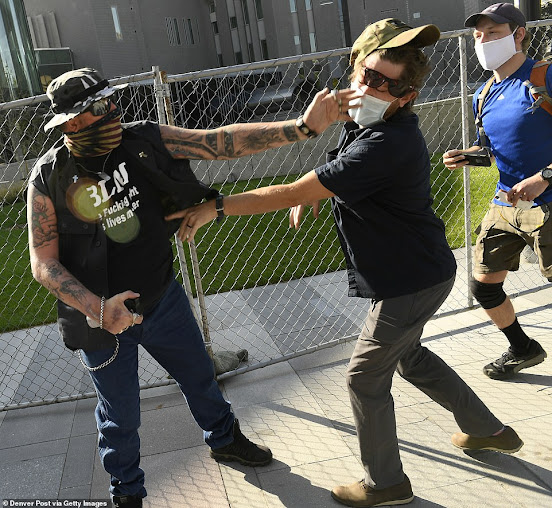 The guy on the left: Shoot-ee.
Guy on the right: Shoot-er.
So, between the 'raising Caine' Aspect of a protest, apparently, according to witnesses, dude on right, had 'words' with dude on left.  Dude on right tried to take dude on left's mace.  Dude on left, as seen, bitch slapped dude on right, knocking offa da glasses. Then, after getting slapped, motherfucker reaches for, and clears leather on what appears to be (to me eyeballs) a Glock -19... more on that in a minute.

Blurry b/c THIS photo is being washed out of the media... they don't want to show that there was -no interaction- after the initial bitchslap.  So, Pinkertonboy, freshly bitchslapped, "skins that smoke wagon" and proceeds to put one in the "X" ring at pretty much point blank range.  Now, to be fair, dude cleared leather, and the Shoot-tee, started spraying mace at him (prolly to throw off his shot)... the pic is AMAZING in that the shell casing has cleared the chamber, the slide is almost back to 'full battery' forward, BUT the bullet hasn't punched thru the poor fucker s head like it did a half-a-second later. 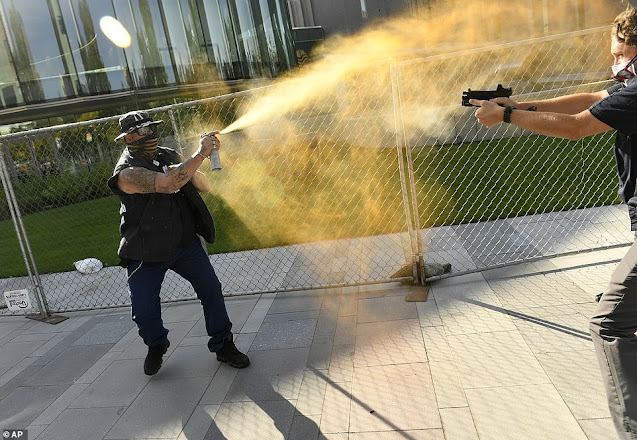 Dude doesn't know it, but he's dead.
So....
MY Intrepid Reporter OBSERVATIONS>
1)  Triggerman was a hardcore AntiFa motherfucker.  That's been firmly established.
2)  It was murder.  No ifs, ands or but.  No lethal force being offered, but nonetheless, triggerman turned dude's head into a canoe.  While under the guise of being 'Press.'
3)  Now... the gun.... this's where it gets interesting.
Now, I -am an expert.  This isn't smoke.  Been doing the 'gun thing' since I was 8 years old, am factory certified on FN, Colt, H&K... you name it... a whole many that'd I'd have to go to the three-ring-binder of bullshit to get all my certs.  I know of what I speaketh.  I'm no where  in league with the "Greats", Miculek, Stoner, Brown or any of the above, but I -am- a fucking expert.
As seen above, the gun is -almost- back in battery.  If you enlarge it like I did here, a few things -jump out- at you.  And yeah BACK in battery.  The shell casing is ALREADY 4-6 inches from the ejection port, the slide is almost closed.  But look at the front of the barrel.. that's threading. 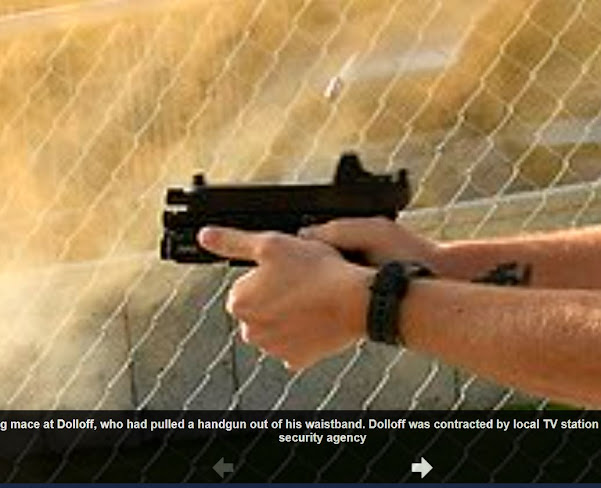 That's really unusual.  80% of threaded barrels, to include my own, are external, NOT internal.  To have an internally threaded barrel means that the slide has to be milled and machined in order for the 'hush puppy' to be threaded onto the barrel.  In the normal instance, the threads show like THIS: 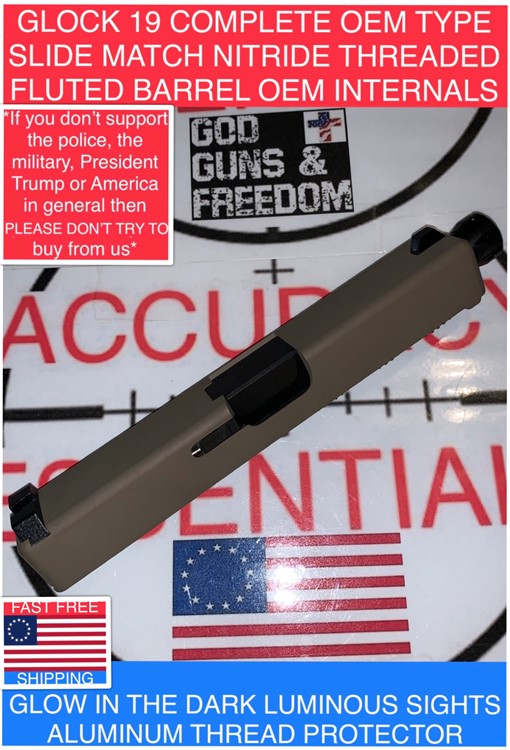 They put thread protectors ont he end to keep the threads from getting fucked up.  In the case of Shoot-er's gun,. it's threaded... BUT... when it's fully back in battery? 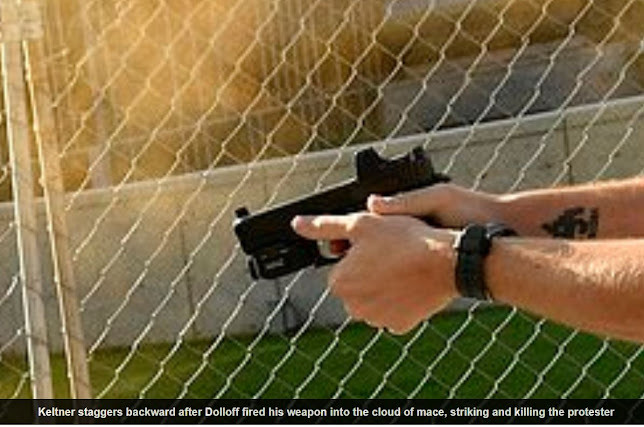 Nice and smooth-faced... no threaded extension.
THAT means this piece was worked on by pros.
Also, the built in red dot and flashlight?  Pros as well.
The BIGGEST givaway?  The Iron Sights.  1/2 inch tall if'n I hadda guess.
Here's a Glock 18, about the same size but with NORMAL sights 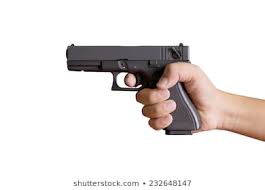 Compare that to the above pic.
That gun is literally set up to be an assassins' weapon.
Reason I say this:
1) Internally threaded (inside the barrel threads) cost a LOT... means the slide itself needs modification to allow the weapon to cycle, AND that it needs to be able to have the hush puppy installed.
2) High sights.  The cheapest sights on Gunbroker for 'suppressor height' are $150.  That's for the cheap all 1/2 inch tall sights.  This dude's weapon has those or better.
3)  Dude has a red-point integral red-dot built into the slide.  Minimum after market: 300 for the cut slide, 4-500 for the sight itself.
4) Flashlight...  lowest, $50 up to 400 for a surefire... you make the call as so far all the pieces-parts have been top dollar items.
Which leads me to:
Who supplied the gun?
I built my own.  Over months, with Sapper building his, and even now, his trigger ain't what he wants it to be b/c of time, $$$, and life.
This fuck, and I'm gonna go hi-end fer for the sake of argruementfying Aye?:
Glock 19 = $799
Red Dot: = $500
Raised Suppressor Compliant Iron Sights: = $175
Internal Suppressor Threading and Slide Work: = $1200
Unseen 9mm Integrated Suppressor: = $2000
Fed Tax: = $500
OK: I'm totally hammered now... Just realized it... been drinking all day.. so's I gots to finish up....
Wow...
OK: Essentially.. dude with no security background gets hired by the OLDEST security contractor in America.  Dude gets armed with a weapon I'd sell my Granbebe for... (seriously, this'a bitchen' weapon)  Dude has nasty word encounter, with the political opposition, and decides to waste the political adversary.  Gets arrested.  Now, everything is -on hold- again.
'Cept for me.
The fact that this guy was 'supposedly' a 'member of the press' means to me that a "Press Pass" is simply the means of identifying an enemy.
You see a press pass?  Aim between the "S" and the "P"...
Center mass doncha know?
So, yeah.. who bought fucknuts gun?  Who's he working for.?  That ain't no "Saturday Night Special"
Nothing we'll ever know
Until Later I Remain The Intrepid Reporter
Big Country
Posted by BigCountryExpat at 11:44 PM