A Theoretical Idea For a Novel

Evening/Afternoon Me Droogs and Droogettes!
Now, with the codicil that I'm writing about a potentially fictional idea Y'all get my drift.
Now, going offa dat, seeings how fucked up sit-too-acha-muh-ations is right now, what with minimal dot gov/dot fed involvement in the protesting, I realized that'd be a great movie concept of a group of business owners/civil nationalists/suburbanites who happen to be veterans who decide to make a difference.
As in "We're mad as hell, and we're not going to take this anymore!!!!"
To paraphrase Howard Beale from the classic 1976 "Network."  It's almost prophetic, that particular movie, 'cept no one has the balls in Mordor Media to say it...  So anyways.
Point being, the federales are running around dressed like this: 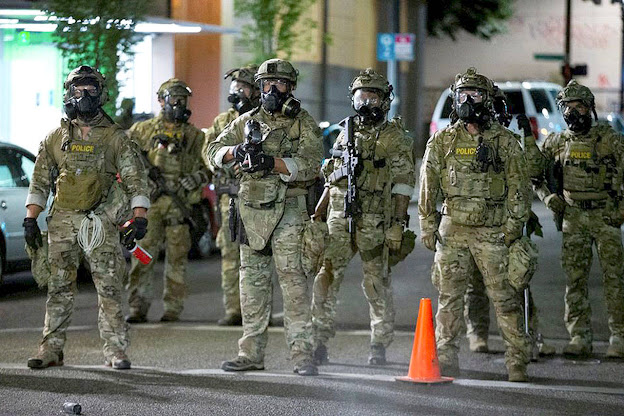 Now... that standard issue Multi-Cam... the Army, in an effort to screw over the creators of it, Crye Precision, re-did it slightly and called it "Scorpion" camo.  Small aside, I was one of the first implementors, as a civilian, outside of Spec-Ops to wear Multicams.  As a contractor, non-DoD contractor, I wasn't allowed to wear 'current in-theater' camo.  The loophole was, at the time, No one outside of some Spec Ops kids I knew (who turned me on to it) wore it in Iraq.  This pic I'm posting was from 2010... WAAAAAY before the Army did... they went "OCP" in 2012. 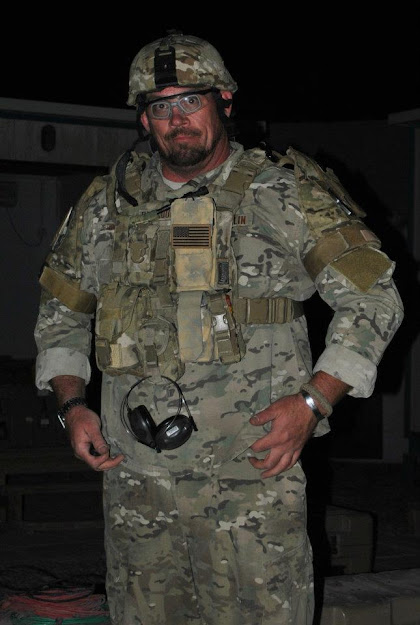 Now, you can see where I had rattle-canned some of the pouches that didn't have the right blend...  This pic was taken AFTER the VERY last evacuation of Tal-Afar in 2010... hairy run.  And, those in the know can see, that ain't 'new out of the box' Multis... they got mileage on them.  The chest rig is/was a Blackhawk Plate Carrier, with Paldrons added for shoulder protection.  You'll notice the 'no ammo pouches' b/c at the time, I wasn't officially allowed 'bang-bang.'

So, anyways.  I still, like many of you out there, and can still wear and fit into ye olde battle rattle.

So in my screen play:
The people, tired of the ungrateful and unrepentant pieces of shit who're rioting and burning down their towns, whelp, the vets get together and realize that they have the same exact gear as the Federal Marshals.
Lookie there... what a co-inky-dink!!!
All that's needed are some patches to make them look like cops.... Ones like this found on Amazon: LINK HERE 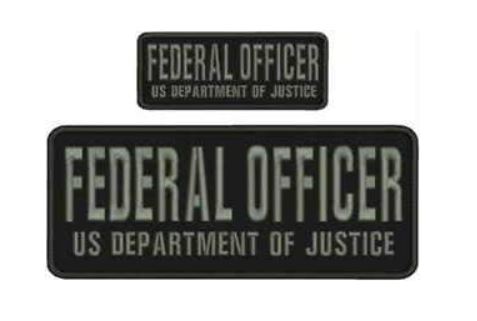 Wow... now as a disclaimer I would never encourage anyone to impersonate a Federal Agent.  However, for the purposes of my screen play, lets go with the idea that the shopkeepers and suburbanite veterans, who are tired of the bullshit, go out to their storage unit, bust out their old gear, and order a couple of these patches.
They then form a couple of "strike teams'... they use either rented and/or stolen Minivans... much like the fed have used already, and show up to the local insanity.  Now... flames everywhere, chaos.  Imagine complete loss of social control.  The team, looking around, sees some of the thugs (AntiFa) scrumming with the local cops.  They roll over, slap cuffs on 2-3 of the rioters, and roll out... the local cops, seeing the "Fed Fuzz" patches don't even question it.

They're just happy to be rid of the current crop of dirtbags.  The "feds" cuff and stuff, to include "reading their rights" to the curs.  The curs, on the other hand, are comfortable, knowing that the local D.A. will either drop charges, or that they'll be released by the A.M.
That's where things go sideways.
For them.
The Vets, now established in the Area of Operations to the local P.D., take these pieces of shit to a close by railroad trestle where there's no cameras, no witnesses.  They herd them out of the S.U.V., with them complaining and bitching.

They then put them on their knees, read out their crimes of insurrection against the United States of America, and the sentence is death.
One shot to the back of each head.  Drag it out.  Make sure to vidya it.  Put it on Bitchute and YouTube later.  Let ALL the others out there know, death is coming... and it has no mercy.  Then shoot them.  Slowly depending on -how pissed they are-  either piece by piece, or quick, Balls Knees.. you get the idea... no mercy.  Then,  Pile the corpses.  Burn them if motivated.  Tho burning them disallows a 'martyr funeral' as you can't show a crispy critter publicly...
I figure in this drama a team of three could harvest at least 9 motherfuckers before having to quit.
Don't want to overstay their welcome at the party amiright?
After the fact, couple of things fall out...
1) A complete distrust of the feds (which is appropriate)
2) Blaming Orange Man Bad for "death squads"
3) A complete succession of hostilities... These trust fund kids have -no idea- what real pain is... finding out that 9-12 of their 'comrades' were executed 'old school' and then the corpses burned?  The lil faggots will leave smoke-trails headed back to Mama and Dada's mansion.
4) The cops, realizing "damned if we do, damned if we don't" start killing these fucks too, thereby adding to the fun.
Too easy.  Thoughts?
I Remain The Intrepid Reporter
Big Country
Posted by BigCountryExpat at 11:51 PM