Mid Afternoon Me Droogs N Droogettes
Spending the day catching up on Top Popp... Motherfucker is brilliant in his analysis of the current stupid that's infectamated the country.

redonkulas.com... check it out.  Dude is a Visionary.

So his latest on the scene is that he's concerned in his own way about how things are going.  No shit Top... things be fucked in a major way, and the dislocations haven't even tuned in yet.  I talked with one of my former Bosses from Iraq, heretofore now known as "The Gunny" as he was/is a former Marine Gunnery Sargent.  He's also about 5 foot nuthin, 100 pounds soaking wet, and is responsible for the scar over my left eye.

Story there: One night in Iraq he n'me were getting plastered watching war movies, and I started giving him some good-natured shit about being a midget compared to me.. his response was to pick my up like -completely- off the floor in a bear hug by my knees!

Drunk w/poor balance, he sorta dropped me facefirst thru his desk... which won the contest of "which is harder?  Big Country's noggin' or the desk?"  The medics hadda put in 23 stiches to close the rather LARGE head wound.  Wasn't mad tho... more impressed at the lil bastard's ability.  We're as close as brothers, having contracted in Iraq, Kuwait and Affy together over the years.  Good times, good times...

So now he's retired out in Farmland Ohio... Town called "Middle of Fucking Nowehere" specifically.  So he told me things there are bad.  Like as in real bad food wise.  It was yesterday afternoon when we chatted, and at the time, he was sitting in 26 fucking degree weather and was pissed that his self-sustainment garden had probably taken a fatal hit due to the rapid freeze.  Seems last week, it was 80 something degrees, and he'd transferred his indoor sprouted-and-prepped plants to the outside for bounteous harvest come the fall.

That shit went sideways with the freeze.
His A.O.: 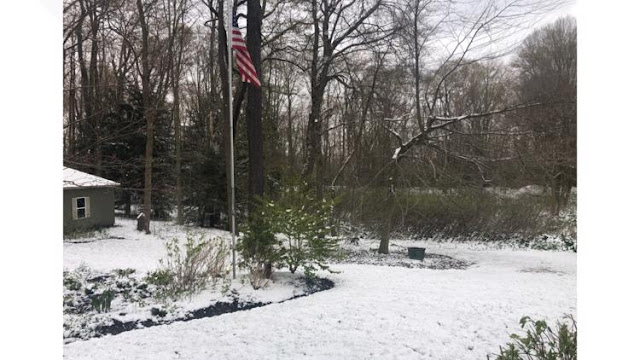 And if it happened to him on the Micro-side?  What the fuck happened to the Macro-side?
Part of the fuckery we've been dealing with, and the reason they've been cull anin-na-mals is the lack of feed as well as the lack of money to BUY feed.  Last year's harvest was the worst in 30 years.  We got 'corcobbed' (pardon the pun) because last year at this time, the farmlands were pretty much submerged with water b/c of the 400 year rains or whatever the fuck it was...

Now?  A deep fucking freeze, combined with last years lack of shit, add in CoronaChan, the absolute ineptitude of our Retardedly Stupid Federales and man, economic collapse?  Shit... this motherfucking corpse of a country... the DFib ain't gonna help... even a shot of pure adrenaline ain't restarting this economic heart...

I'm going looooong on the next paycheck in freeze dried shit.  Like WAY long.  I'm already in good shape, but more is better.

The Mizzuz needed me to get something off the porch... which I had secured the slider with the sawed off broomstick that has 1 inch of play in it.  I personally closed the door tight last night as the pneumonia hole... hell I don't want to pay to AC the lanai...  So the door was tight.  And when she asked me to get her spraypaint offa the porch, I noticed the door was cracked open.. as in slid all the way til the broomstick was tight in the notch.  Asked her n Sapper if they'd touched the door.  Both negative.  So's I checked the Lanai, and oh ho!  Somebody's been creeping!

OH JOY!!!  RAPTURE EVEN!!!
Tonight... please let them come back tonight... I'm rigging a nice surprise that'll wake us up.  Ain't no one we know, that's for certain.  Usually the dog is hell on trespassers, unless she's in w/Sapper.  The dog occasionally sleeps in Sapper's room and she tends to be out like a fucking light when cuddled up with him.   Tonight, she's going to be crated in her house right next to the slider... that is if the booby trap I'm rigging fails to work. 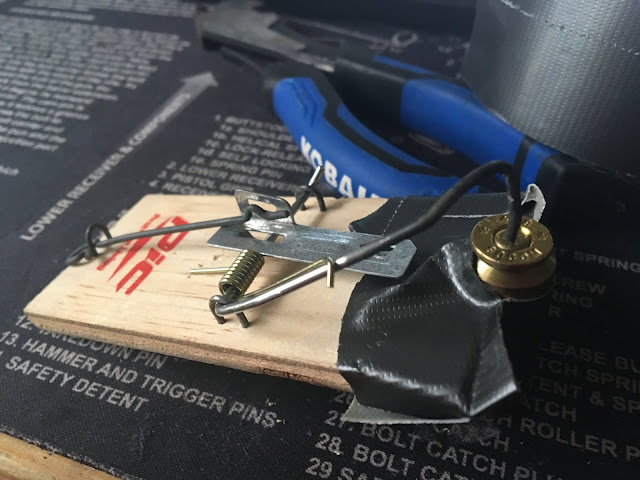 Yer basic mousetrap, cut, and re-rigged with a .458 empty round (but with a live Large Rifle Primer set in) so that the re-done trap arm will set off the round if someone opens the door.  I cut an appropriately sized half moon in the wood so the round could be a b it set and stabilized with something other than the 100mph tape.  Nonlethal, but'll brown their shorts, wake me up, and let me respond appropriately.  It also means stepping up the game on the home security.

Doom on You Charlie.

I won't rig it til after dark -in case- it IS one of the diverse members of the neighborhood doing dirty deeds.  Two weeks ago at the height of stupid CoronaChan Bullshit, the Mizzuz... fuckin' dumbass left her mask, in the bag, w/a spare new filter in the car.  And left the car unlocked.  Fuck me.
Yaeh... someone took the opportunity and boosted her shit... and it was a NICE RZ Mask... hot pink and irreplaceable for now.  She's stuck now with the ugly assed N95s I got... that pissed me off.

Now I -know- someone is creeping.  this's gonna be fun.
Bag of Quick Lime? Check
Shovel? Check
Unused fenced off on 4 sides side yard free of casual observation? Check
Here's to a fun filled Sunday night free of any "Imperial Entanglements..."
Later on, I remain The Intrepid Reporter
Big Country

Posted by BigCountryExpat at 3:23 PM