Although no rest for the wicked apparently.  The HOA sent out a "Big Brother will be coming around next week, so make sure the lawn is raked, the trees trimmed, etcetcetc.  Personally, they know not who they be fucking with methinks.  This's a relatively -new- for the definition of the Homeowners Association group.

Little Known factoid for y'all.  Back in 04/05 in Baghdad, I had a bounty put on my head by Al Queda in Iraq (AQI).  Apparently they had me on a $25,000 Kill list for my head as I was a 'known good guy' in that I paid the locals better than they did, and supported and partnered with a local elementary school with the school my MomUnit was teaching at at the time stateside.  That unfortunately ended -poorly- when the bad guys blew the school up and KIA'd a lot of kids.  Needless to say, that particular event shaped my "Fuck 'em take no prisoners" attitude where instead of shooting-to-kill in some instances, I made sure to 'shoot-to-wound'/cripple.  Bonus points if there were more than one dude and his buddy came back for him.  I'd do the same to him (cripple the savior), then headshot the first wounded guy. Then leave dude #2 to bleed out.  Spine shot with a Dragunov.  7.62X54R ain't no joke.  Truthfully I only did the 'double-double' once, and another dude, whelp I hit him in the crotch with a 'modified' round... took a dremel to the tip and gave it a niiiice flat tip with a dimple. 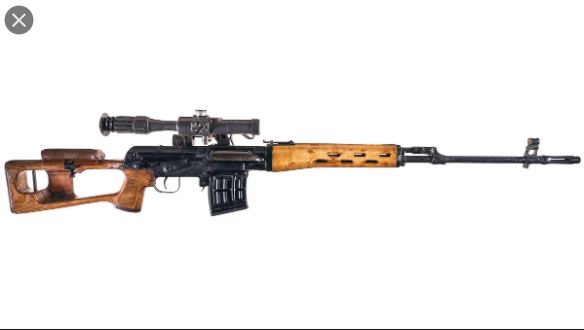 Mind you NOT a hollow point.  Juuuuust a dimple... That being said can I help if I can't measure the 'dimple' very well?  point 25 millimeters, half an inch... whatthefuckever... not like anyone was gonna show up to complain...
Now to all y'al saying "He didn't have no Dragunov!"  Here's a pic of my bed w/my shit laid out on it... 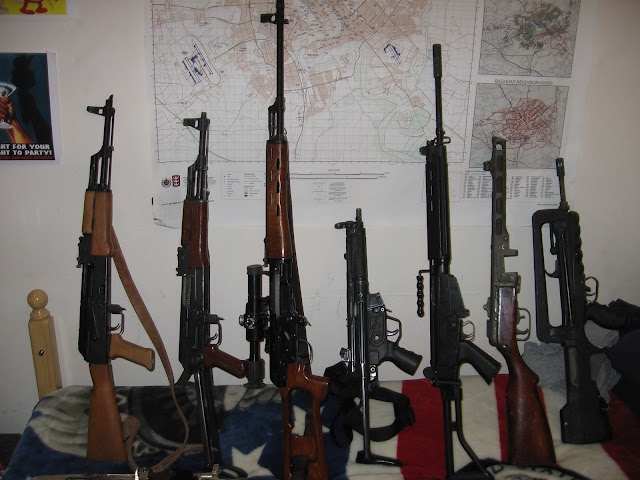 In order from Left to Right:
1) An American Made "Eagle" AK-47 select fire... really weird as I've never heard of a weapon manufacturer named "Eagle"... methinks it's a Christians In Action company, especially since it was select fire, and the buttstock was far larger and longer than a standard AK (better for Caucasian use)
2) A Chinese Type 56 folder.
3) My Dragunov... god I love that thing.  I -tried- to legally import it, but of all groups, the State Department kiboshed it on account of the "no import/export" from Iraq... believe it or not, the ATF signed off on it!
3) A Turkish knockoff MP-5.  Not bad... not great, but not bad.
4) Belgian made Fabrique Nationale FN-Fal Para model.  Only had one mag and too heavy for regular use.
5)  Now this one was WAY cool.  A PPSh-41 in 7.62X19.  THIS one was literally -brand new- when I got it... covered in 50+ year old cosmoline or the commie variant.  I researched the serial number and manufacturer marks, and found it had been built in Stalingrad in 1943.  A piece of living history...  It had a 72/74 round drum for it, and I had to soak it in 89 octane mogas to get the cosmoline off of it.  The guys who gave it to me (gotta love 1st CAV!) found it in a well.  Never been fired.  If it could tak... maaaaan... it should be in a museum.
6) And lastly, a French FN-MAS Bullpup. No magazine, and only surrendered once.  What was fucked was the fact it was even in country.  We found a lot of french weapons which just shows the fucking french don't pay attention to international treaties at all... 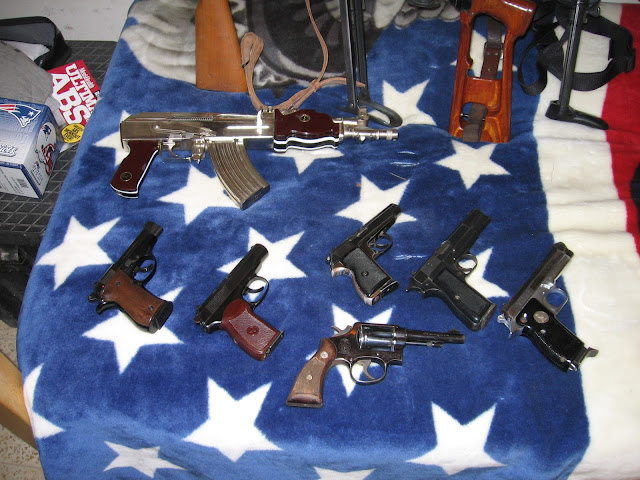 And then the pistolas:
Left to right with the AK listed first:
1) A silver plated AK-47 from Saddam's personal life-guard.  Piece of shit... who ever plated the silver fucked up the bolt carrier and cracked it... fucking thing wouldn't fire on a bet.
2) A Beretta Cheetah in .380... a nice pocket piece.
3) Basic Markarov... not notable at all.
4) A Nazi Walter PP.  Complete with Nazi markings... another WW2 find...
5) at the Bottom, a .38 Smith and Wesson revolver
6) A Browning Hi-Power former Iraqi poilice handgun... my daily carry.
7) Lastly a Belgian Helwan Iraqi Made piece of shit called a Tariq... 9mm that I'd rather throw at someone than shoot.
And for the doubters: 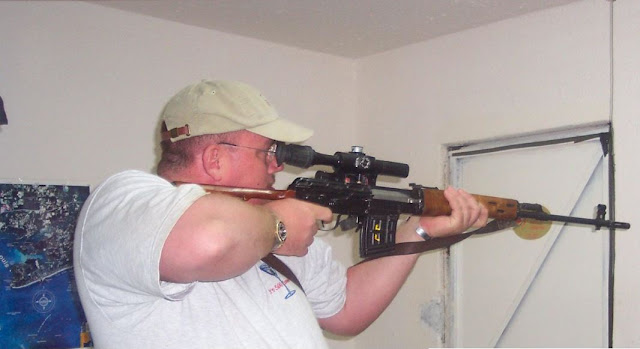 Yeah, Dat Me.
Aiming thru a window at whothefuckknows now... too many years too many beers...  Still  a cool pic from days gone by.

So I'll cover the title of this artcle later... per usual I got side tracked...
Sorry for the digression, I got to make dinner because it's not enough to work a full shift, God help if -anyone- here could do more to make my life easier...
Til later, I'm The Intrepid Reporter
Did I mention I've got the Grandbaby this weekend?
Big Tired Worn-the-fuck-out Country
Posted by BigCountryExpat at 8:07 PM