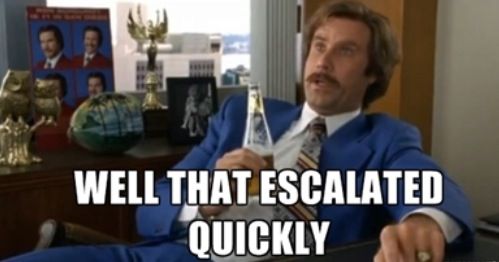 Anyone else wanna tell me this's -just a common flu bro-...

Especially since now a bunch of kids have it, and 49% (by offishul sources) say that 49% of cases in New York are UNDER 40.

So, in my immediate locality, they've announced a full lockdown/curfew starting at 22:00 Friday.  Dunno how thats gonna fly with "Floridaman" but this we shall see I figure.

The Curfew is supposed to be over the weekend... 10pm to you civvies til 0800 Monday.  I can only imagine how thats gonna play with da Yutes in  the urban areas downtown.  That being said however, Tampa does have experience locking down, as they did when the Republican National Convention was held here some years back.  They locked this motherfucker down tighter than a tick on a coon dawgs ass.

OUTCOME:  IMO 'bout damned time.  Fucking idiots here locally have been acting like fuckin this's some sort of vacation, and yet the numbers are showing a marked increase in a short amount of time.  Our local hospitals haven't even started getting slammed.  Short term:  Lots of idiots getting arrested and stuffed in County, followed up by a massive outbreak at County (of course).  Followed up then of course of letting the Tards loose on the population... AT which point the house is gonna have a gaurd at all times.

Now:  North of Here:
OK:  So, MomUnit tells me on her Rarified Barrier Island Hideaway they had a bit o'a tiff so to speak.  MomUnit told me that the island she lives on (average income of the retirees there is upward of 50 million... yeah... Oprah has a house there) has a population that's delineated by "the full timers" and "the fucking tourists".

It's very much what people are seeing and what I posted about a ways back about the Hamptons in New York.  The 'rich city folk' hat up and unass to the "use-it-in-the-summer" dwelling in the outer reaches away from all the diversity that surrounds them on a normal basis.

This puts an unreasonable and undo amount of strain logistically speaking as the local stores (already under enormous pressure to begin with) have only a certain planned for amount of food and such for the people that're normally there.  Seems the rich fuckers descended, (much like in the Hamptons) like the proverbial plague and started emptying the local Grocery store.

Seems one rich asshole had essentially loaded like ALL the meat.  Every single steak, ground beef package... a full fucking cart of retarded proportions.  Blatant hording.  A local apparently took umbridge with the gentleman, and insisted that he was A) being insanely selfish and B) even if he froze all of it, it was a 6 month supply of food, which was crazy as other people need some too.

Far be it from me to cast aspersions, however, this guy, from the sound of it (Rich Fucker) was pretty much being a complete and utter dick.  And then foolishly told the local to get stuffed and to fuck hisself.  And then, on top of it, threatened the local with physical violence.

Maaaaaan... you just don't do that in the South.

So... aforementioned local opened his jacket, revealing from what MomUnit said was a holstered .357 Magnum in a shoulder rig.  The New Yawker then apparently pissed himself.  The local calmly advised said Rich Fucker that if he kept running his cockholster, that he'd be in a heap more trouble than he already was, as SURPRISE! The aforementioned local is a reserve deputy.  Instead of arresting him for assault, he made the asshole put up all the aforementioned groceries, and told him he was barred from the store in-perpetuity.  That in itself is a fitting and brutal punishment as having been there, the next sizeable store is a hour and fifteen away... without traffic.

So, now they have a deputy on duty outside each day, checking IDs to make sure no one gets stupid.  Smacks of Martial Law, but ya know, sometimes ya gotta make sure the Morons don't get out of control.

OUTCOME: Lotsa folks relocating to areas they aren't really wanted.  Like we didn't see THAT coming.

I understand what some people say vis-a-vis libertarianism, and "Muh Civil Rights" and "Muh Civil Liberties", however, as I've said before, these ain't normal times.

Hell, one of the better "Apocalyptic Jokes" I've heard speaks something about "Trump" and "Pence?"  Dunno but it was funny at the time... sorta like this: 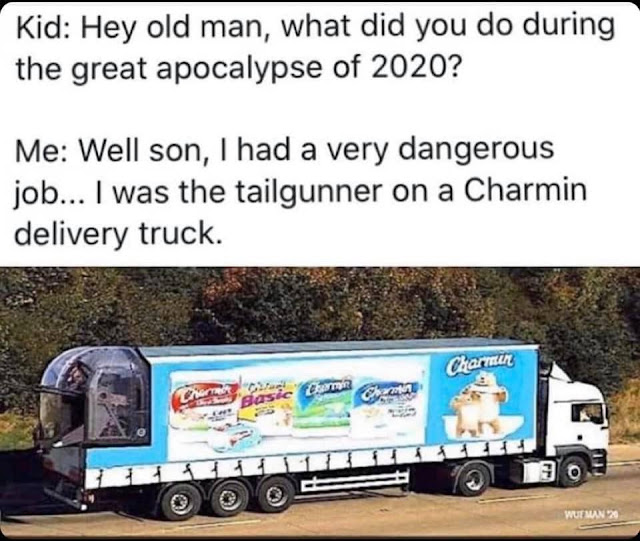 and then there's this: 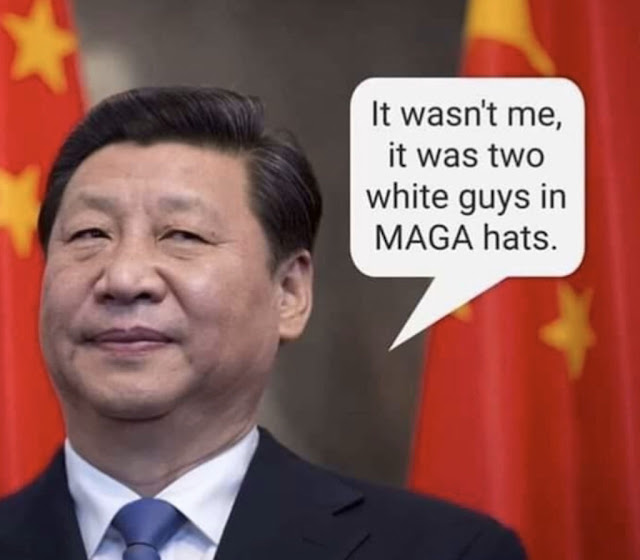 So, until later, I Remain The Intrepid Reporter
Big Country

Posted by BigCountryExpat at 3:32 PM