Why the Fuck not?

Afternoon Me Droogs and all the Bitter Clingers who come 'round here for the fun, the insults and nay I say the entertainment?  Leastways -I'm- entertained. 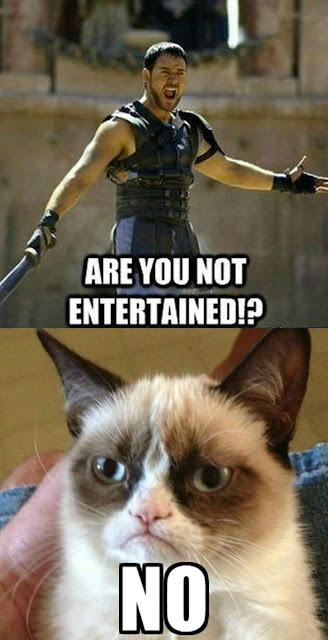 Grumpy Cat, however, Disagrees with Me
So I spent the early waking hours (10am) doing my resume over again.  Actually I'm doing multiple resumes.  Each one aimed at a certain job type.  The career counselor I met with yesterday pretty much told me flat out, that my resume as is, I ain't getting a job with anyone.

Primarily too many -good things- if you can believe it.

Too many degrees, certifications and the like.  Now when I was originally starting out in the job market, the more, the better.  Those without certs or such ephemeral whatnot were almost always hustling a new cert.  Hell, I'ma signing up for the Lean Six Sigma Green belt now, just to add MOAR to the table...

However, according to Mister Career Counselor, the Millennials who are now in force and unsurprisingly went into HR as a career, don't want actually qualified people working for the company.  Seems those of us with actual credentials make the uncredentialed feel bad.

So on that note, I leave it to this:

And chasing them with a metric fuck ton of Vodka while I bake.  Best to be toasted while baking eh?

Until Later, I remain, The Intrepid Reporter
Big Country
Posted by BigCountryExpat at 5:20 PM