Morning Droogs n' Droogettes.  Seems the deplatforming bomb has done another strike -again- on Mike over at Cold Fury?  I'm getting the usual 'Error 500 Page Not Found' again... have been for a couple of days...

It's not the first time.  Mike's page took a hit from a Hacker who went in and really fucked up his shit for whatever reason.  He came back up, stated shit went pear shaped, and he was back, and now? 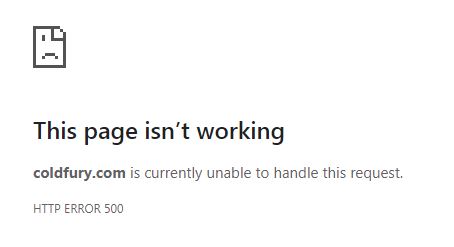 Guess he really pissed off someone.  This isn't the "Chateau being openly dumped by the Wordpress Gods" but what appears to be someone or something getting directly into his shit... a non-provider attack so to speak.

Meh.  Too bad.  I liked reading his shit.

Now, on to the latest entertainment.  The Shampeachment.

"And then, one day, a new Hitler got elected, and nobody understood why?  And then the Camps opened, the boxcars were filled up with the Jews, who were exterminated en masse, en toto, and everyone lived happily ever after."

Talk about a clueless bunch of fuckweasels.  I've worked with, and known quite a few of the Hebrew and Israelite extraction over the years... good people for the most part.  FANTASTIC Fighters/soldiers.  No, I personally don't necessarily believe in a vast Jewish Conspiracy to take over the World, however:  That being said, the 'leaders' and 'elites' of this Country, who just so happen belong to the aforementioned ethnic group are the ones pushing this bullshit!?!

You are some utterly clueless motherfuckers.  Dumber'n a box o'rocks.   Fucking MORONS!

Someone needs to do this to those Idiots
I mean really?

Yer your own worst enemy.  You can NOT tell me that the thought hasn't occurred to you that maybe just maybe  that the optics of this particular maneuver, albeit great to your leftist lunatic fringe supporters, this looks OVERWHELMINGLY BAD.  You are, by and large, essentially trying to overthrow one of the most ardent supporters of your fellow co-coreligionists in Israel that's sat in the Oval Office in decades and then, by dint of the fact that the Cheeto Jeebus is one of the most popular presidents elected in like forever, You're trying to get him thrown out of office.

Maybe its all the inbreeding.  Y'all don't like to let the Goy in...

You fucking idiots...  and you wonder WHY the rise in antisemitism is climbing?  You GENUINELY have no clue?  Good Christ... as the Joker said in the movie maybe "You get what you fucking deserve!"

Even one of the guys over at Gun Free Zone has concerns...
He's a member of the tribe, and even HE knows this's bad...
If some of these people don't get a clue, this will NOT end well...
It's literally trying to put out a small smoldering ember by dumping a glass full of gas on it, and when it flares, being surprised and deciding the next best step is to use a tanker truck of hi-octane to put out the blaze.