A lame Excuse but really...

Good AFternoon me Droogs and Droogettes from Big Country's Home for Wayward Veterans (or should I be calling in veterinarians now?)  Seems we added a new member to the Doom Crew... a rat-catcher model.  Meet Bob y'all: 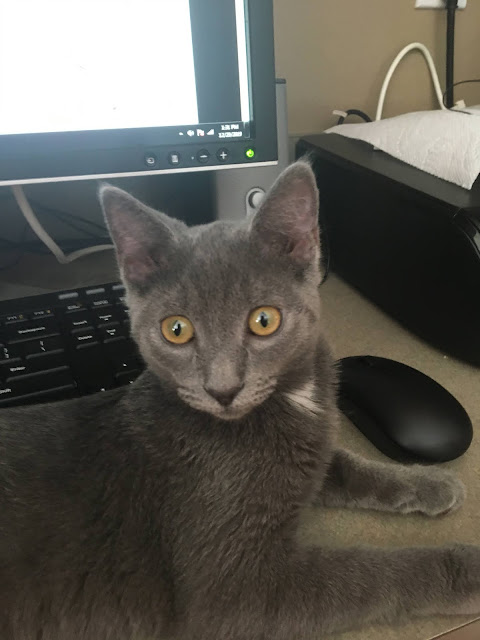 Yep.  Got ourselves a cat to add on to the Dog... I had a cat before this for a number of years...  Tiki was 1/2 feral and about a year ago, disappeared on us.  We found his remains a couple weeks after this vanishing, much to the heartbreak of us all.

I had -promised- myself no more cats.

Until one of the neighbors started posting on the community bulletin board about finding a sweet Manx Male kitty, and that she couldn't keep him b/c of the landlord issue.

I followed it til the last minute and when no one picked him up, and he was due for shelter bound, I went over and got him on the Day after Christmas.

I forgot what a handful the lil kittenz can be...

To the point that his current favorite position is thus: 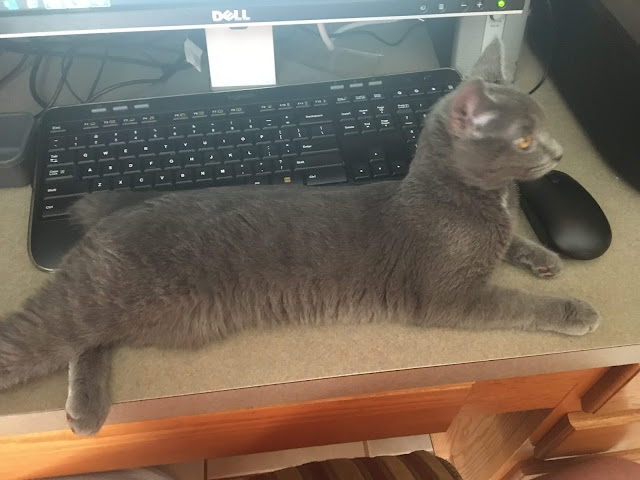 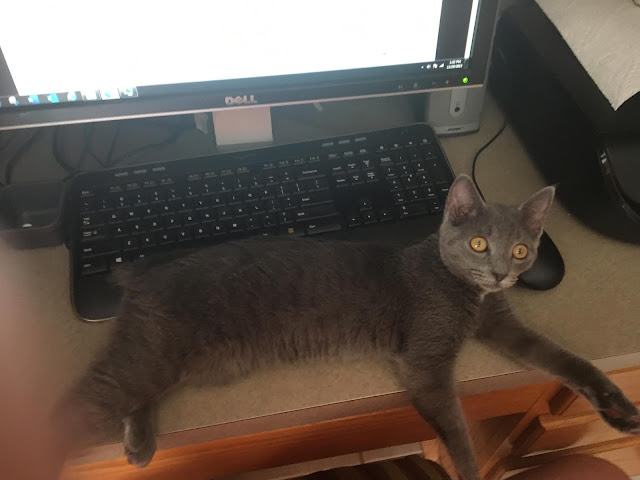 "You want me to move what?"
Yep.  Apparently MY training is well in hand.

Every time for the past few days I've tried to start to blog, and the typing seems to attract him... the 'clicking' and pounding on ye olde keyboard... at which he then jumps up, surveys the sights, debates on chasing the cursor across the screen, and then settles down right on the fucking keyboard to relax.

Like I don't have enough other bullshit distracting me?

And he doesn't apparently sleep.  At ALL.
SO its been busy... trying to train the dog not to crush the cat... she's not trying to hurt it, just has no idea in relative size issues... Stella still thinks she's a 10 pound lapdog, not a 60 pound muscled pit-bull...  so there is reasonable danger as she wants to play puppy style and bounce on her up and down...  which would make cat-pancakes in an ugly way...

So, what with Bob on board (what do you name a cat without a tail?  Bob of course... that and all the other names for a gray cat are just too faggy IMO... Smokey, Ash... Fuck that Bullshit... Bob... just Good Ole Bob...)

So quickly onto Virginia... Man... the more I hear from the Gov'ner there, the more I think "Thet boy ain't right in the haid!" as they'd say down in the holler... Did he seriously get dropped out of the Libtard Tree and hit every. single. branch. on the way to the ground?  NOW he's increased the Department of Corrections budget by $250,000 ?  What in the fuck?

Unless he's expecting to just exterminate all those who refuse to follow his enlightened and awesomely intelligent ways and laws.  $250,000 can get -quite- a few mass graves dug.... just sayin'...

In reality, the quarter of a mil is probably to show that he's serious and has the resolve to implement his brilliant and far-seeing anti-violence programs and that those who are bitter and clinging to those bourgeois and outmoded ways of thought  in this otherwise time of Progressive Fundamental Change that the Highest One, the Obamamessiah (Piss Be Upon Him) promised in Better Times past.  Those who would stand against him will be smited with the righteous power and fury  of the State.

Whew... start writing like that, and I find myself being of two thoughts... 1) it's easy to get on a demagogic role -real quick-... Writing that shit was far too easy...  sort of scary... and 2) Any bets that -somewhere- in that diseased mind, Northam is actually  more than likely thinking very much along the lines of what I just wrote?

THAT should be terrifying to any sane man or woman.

However, we're dealing with Democrats.  Deranged Democrats.  I mean these people are truly mentally ill IMO.  The amount of insanity to have to think, act and have the urges to impose your will like that?  It's a sickness.  I mean in their heads they're doing it "for the children"...  or "to help the lesser able" ...  all of these are predicated in some twisted self-serving belief that they are somehow "better" than everyone else...  the "superiority complexes" installed and instilled in them... jesus... I saw it in the Army quite a bit...

Take for example an Military Policeman.  Take an average intelligence 18 year old Man or Woman.  Give them 20 weeks of Basic and AIT (One-Unit-Station Training is what they call it now) and after the twenty weeks, give them a loaded gun, and arrest powers... over -everyone- to include the Commanding General of their base...

Any wonder MPs are for the most part complete and utterly power mad dicks?

If The Trumpinator had just rolled in, said "I got NO fuckin' clue as to what I'm doing, carry on Biddness as Usual." you can fucking take it to the fucking bank that NOT ONE OF THESE FUCKING THINGS from Russia to the Ukraine or ANY of the bullshit that gone on woulda happened.

Its the fact that they were so paranoid and that they -knew- from past interaction that Trump was, above all, that which they are and never will be: a Human Being and one of Great INTEGRITY.  They had ALL sat with him, broke bread with him, appeared at fundraisers... hell some of him took his shekel when they needed it...  and then oops.

Can't have a Man of Integrity running around loose... people will begin to see -just- how rabidly corrupt the whole machine is.

And when the time comes.  We are going to kill you all.  And your families.  And raze your birthplaces to the ground, salting the earth from whence you sprang.  You will be eliminated -completely- from the memory of man, left only as myth and scare stories for small children.

You will be cast out forever.

Until Later, I remain the Intrepid Reporter
Big Country
Posted by BigCountryExpat at 2:30 PM