Good Evening to the Droogs and Droog-ettes that willfully sacrifice brain cells and intelligence quotient points to come here for a good ole right winger "dumbin' down' ho-down"!

Well, todays rant about the ChiComs reenacting "Schrindrers Rist" in Hong Kong wasn't enough...  I'ma all sorts of assed up about various things, but the worst of it is LtCol Alexander "Shitbag" Vindman... THAT particular motherfucker's got me heated.

The Editor, (who thus far has kept his damned trap shut thank the Gods) is asking: "Hey Big Country, why the hard-on for the Colonel?  Isn't he just doing his job?  Or is it you just hate officers in general?"

OK... the dweeb has a point... I, for the most part intensely loathe ossifers.  Misspelling intentional... Ossifer = Ossified... Oxford English Dictionary #2: "Ossified: To cease developing; to be stagnant and/or rigid."  If that doesn't describe modern military officer mindsets, then nuthin' will.

OK: Disclaimer:  I came out of the Army with 3 Field Grade Article 15s.  Means that to the Army, I was a bad monkey in the eyes of the battalion.  I 'stood before the man' 3 times,  and kept my rank every single time.  No bullshit.  Lost a fuckton of money (2 months of pay at one point, pro-rated) and actually had to go from off post housing to on post barracks living, (restricted to base even tho I was married at the time) and more extra duty than any man should ever even hope to experience.  The only reason I kept my rank was the Battalion and Brigade Seargent(s) Major(s) (or is it Majorii?) positively relied on me as a MASTER SCROUNGER.  I was, without any bullshit the BEST thief they had in the battalion, never mind brigade.  They knew that if I lost my 'double mosquito wings' (Cpl) or heaven forbid, bust me outta my Sham Shield (SP4) they'd lose the ability that I had to get what was needed, when it was needed, and not raise any investigatable flags so to speak.  A story on that my next post.

So yeah, after being busted 3 times, two legit, one Bogus by my count, I'm just wondering:

WHERE THE FUCK IS THIS RETARDS FUCKING CHAIN OF COMMAND, AND WHY HAVE THEY NOT CURB STOMPED THIS TRAITOROUS MORON!!!???!!! 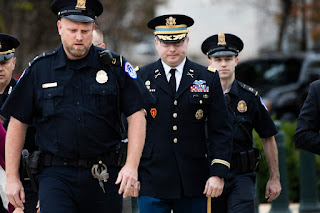 I'm ashamed.  Of his Crossed Rifles.  His C.I.B. (which, despite ALL the shit I've been thru, have never been eligible for dammit) His fuckin Ranger Tab...  His Airborne wings... OMG... why hasn't somebody beat the fuck outta this guy, killed him, and buried him in the deserts of NTC?

Back in the day... an asshole like this would have been forced into retirement early.  His Pillsbury Doughboy face... it's like Charmin... so squeezable.. so punchable.  I dunno if I could follow such a slimy creature.  IF and IF he doesn't get cashiered, they're gonna HAVE to retire him...  If he -ever- gets assigned to commanding a real line battalion, I'm sure that the real  line dogs'll have him DRT (dead right there) as soon as they hit ground in hostile territory.

In fact, there VERY fact that no one  has brought up or even mentioned the Purple Heart he has (outside of the fact that he has one) No one has mentioned any aspect of just how he fucking got it.  Normally the fucking DemonCrats would be broadcasting  to-and-fro just how said-Shitbag got the fucking medal.  Very fucking suspicious in my thought pattern.    Most motherfuckers in political realms can't wait to talk about "how brave" and "how awesome" their guys are... on this one?  total radio silence.   Color me disbelieving.  Me?  I'd say he took some shrapnel from a frag in the latrine during an indirect fire incident, and they 'spun it away' so's to keep the units record 'clean', rather than admit that the troops tried to kill their C.O.  Just sayin' and supposin'. 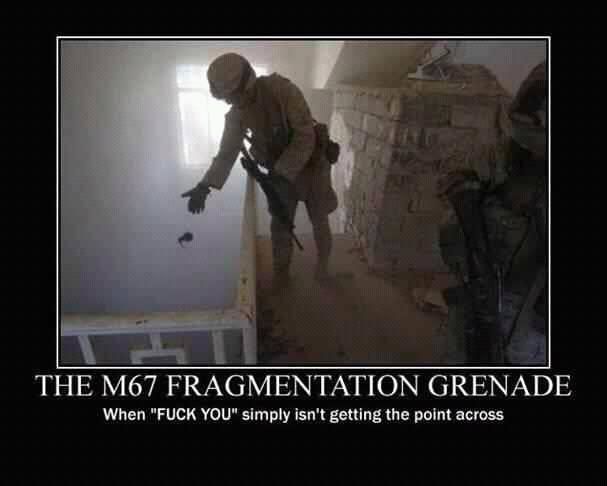 More than likely the case....

Besides this, anyone in uniform can see he's violated like a shit-ton of regs.  The whole "No politics in uniform", the "failure to obey a command/orders from a higher authority" (namely Trump), "Failure to be a decent human being" (yeah I made that up,) but its fuckin obvious this guy is a ticket punching Piece of Shit, not worthy of leading a girl scout troop, nevermind a hardcore group of Infantry.

I'd suggest a Full Bore Dirty Whore Article 32 Investigation.  In fact, I'd say that the Inspector General (the enlisted mans friend) be contacted.  In fact I encourage ALL  of y'all drop a dime to prevent a crime.  The IG website is Office of the US Army Inspector General.  From there you can:
File a complaint: 1-800-752-9747, during normal duty hours of 0800-1600 (EST) M-F

Bury them.  Make THEM do the job that we pay them for.

Until later, I remain, The Intrepid Reporter
Big Country
Posted by BigCountryExpat at 8:06 PM