Ye Olde Intrepid Reporter is back from a long assed hiatus and is still somehow alive and kicking despite the ways of the world....

WHOOOOOOOLE Lotta changes in this here world...  Especially my own.

Looking back, I can't believe that I haven't been on here since late 2009.  Changes in life to include Insanity, a Near Death Experience (tm), Cancer, followed by a stint in Asscanistan, Divorce, ANOTHER trip to insane-ville, New Love Found, New Love Lost and a WHOLE bunch of shit....

Well, when we last left the Intrepid Reporter, his blog had been hijacked by the nefarious no-goodniks of God-Knows-Where... Apparently -someone- had hijacked Ye Olde Intrepid Reporters site and was squatting on it.  It was locked down and what with posting from The Saddam-A-Go-Go being as difficult as it was, (what with hinky sat-time and bandwidth issues) I decided taking a break was allowable...  It was just too damned hard to prove that I was I as it were, (or is it I is me? Or is Me is I?  Fuck it... as Daffy would say "Pronoun Trouble!")  as I was saying...  too much hassle b/c my IP was pinging from Iraq, the Blog Admins were saying that it couldn't be me as I had started it in the states, and yadda yadda...   so.... I took ye olde long assed break til I could square things away...

Iraq was winding down as it were, the Dirty Haj (tm) were just waiting for us to leave, and... 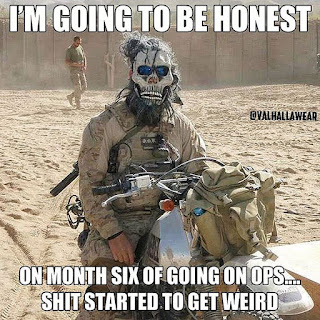 Needless to say Big Countrys Mental fi'ness had kinda sorta... well... degraded pretty substantially.
As in I started going balls-out insane with paranoia and some other shit.  (10 years of continual deployments will do that to a dude amiright?)

So... Ranger J went to the wall and pretty much told them I was actually a significant danger to both myself AND the Ugandan guards at that point.

To whit:  As things started to fall apart and shut down in Iraq, the "Gan-Gans" who were hired as perimeter security and on-base security started running scams to buy up all the shit (TVs Vehicles...anything) that the Americans were going to be leaving behind.  Now mind you, I had already worked a deal with my local Haj, a guy named Ibrahim... he had been a fair-dealing haj with me for a number of years... like 6 or 7... never really screwed me, and I had it all in place to sell ALL my shit, a 60 in plasma, my SUV "Godzilla" a whooooole lotta other shit.  He was offering me a pretty damned good price all things considered... but as time went on, I figured 'shopping around' wouldn't hurt as The Haj (tm) are known for screwing over as many individuals as possible... as badly as possible... especially us "Kaffirs" (Infidels)... it's literally a religious edict to screw us when then can...  So lo and behold, when the local Gan-Gan contingent showed up at our compound, and told us they were shopping around, I (mistakenly) let these subhumans in.

They came around and started telling us how that they were "good Christians" and that we should sell to them as the godless Haj didn't deserve such a bounty.  I told 'em flat out: "Money Talks, Bullshit walks."

They then went around and started making obscenely lowball prices for all my shit...  I mean INSULTINGLY low prices...  my 60 inch plasma they told me that they could only afford $20 bucks for it... for what retail new at the time was a $1200.00 screen new, and that Ibrahim was going to give me $300.00 for...  they then offered me $500.00 bux for my truck... a 2004 Suburban full size with the contractor light uparmor package as seen below: 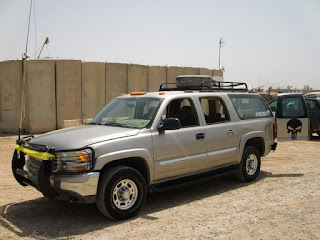 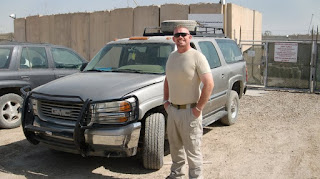 A measly $500 bux... ARE YOU FUCKING SHITTING ME?  Once  I got over the brazen audacity of these fucktards, I quickly threw their black asses out of the fucking compound.... Told 'em flat out I'd prefer to sell to the Godless Dirty Haj than get screwed over by 'supposed' "christian" child soldier maybe-fucking-cannibals.   Told them "fuck you very much, don't come 'round here no more" and left it at that.

I went to Ibrahim to insure our deal was still solid, and relayed the encounter with the Gan-Gans, and he started laughing his balls off.  I was like "Que?" and he related that they weren't working FOR him per se, but were freelancing to get the stuff we were leaving behind at totally discount rates, using the "we're poor Christians from Apefrica" to get the lowest price possible to buy, and had a deal to sell to my towel headed friend at the going market rate...  which only pissed me off more...  What a fucking scam right?  Fuckers played the "we're poor, sell to us b/c we're Christians," lowball the fuck out of the Americans, then turn right around, and sell to the Haj for a profit.  Now mind you, I can appreciate a good deal / screwing...  but NOT when it's made under these particular circumstances... it was fucking a piss-me-off... and when I threw the child-soldiers out of the compound, many vile oaths were passed between us... they were pissed that I wouldn't sell to them, and I was pissed that they tried to lowball me... hell, if I had known they had already brokered a deal aforehand, I would NEVER have allowed their cannibal asses INTO the compound to begin with...

The pencil necked editor is once again waving his fucking hand and calling me out for calling them "Cannibals..."  said I'm being "Raaaaaacist!"  Jesus on a crutch...  Even after 7 years I can't get rid of this guy... OK Poindexter... just google "Uganda Cannibalism" and you get about 121 THOUSAND entries in the first  point .5 seconds.  Fuckers like to eat human flesh OK?  Hell, their former leader Idi Amin was a well known eater-of-long-pig: https://en.wikipedia.org/wiki/Idi_Amin ... nuff said there... they're NOT civilized, and from what I saw, barely that nowadays. Soooo anyways...

It started small... air let out of my tires.  Literal human feces thrown at my hootch over the wire...  then it started accelerating.  Tires slashed.  Paint keyed.  Windshield cracked with a rock.  At which point I KNEW who and what the fuck was going on.  We had the exterior and interior of the compound wired with 2nd Generation Night Vision security cameras, and I SAW these apes fucking with my truck.  Problem was on a NVG, as horrible as it sounds, one Gan Gan looks like another on the video.  I nonetheless went down to the employer of these wayward cannibals, (I'll NOT say who they worked for, to avoid the obvious libel charge) but nevertheless, they pretty much had an attitude of "Well, we barely keep them from eating each other... what do you want from us?"

Well... I told the Bwana, the Great White Bossman to pass on that over the next few days I'd be sitting in the hide on the roof of one of the buildings at night, and ANYONE I saw close to the compound I was going to terminate with joyous prejudice.  I also added since we WERE a secure comms facility, that any action taken by me was considered to be fully allowable to 'secure' our compound... after all, even the fucking MPs couldn't come into our A.O. (area of operation) without at least a General Officer signing off on it... we had "double secret protection" in that respect... and I told Bwana that if he didn't want to have to tell the head orifice just WHY a member of the Comms Team up the street had gunned down some of his child-soldiers, he'd get his assholes in a row and under control... lest I come back.

Well it stopped.  But the seed of paranoia was planted.  Add on some mortar attacks outside of the norm, a few close calls and some serious flack I was taking from the now-Ex-Household Six, and I started to unravel.

I'll get into more about the XHH6 after a while, but the final straw came one day as I was leaving a car wash outside of base.  The Haj had set up numerous businesses catering to the US Contractors and troops, one of which was a full service detail car wash.  After leaving Godzilla was doing well, however, there was a 'shimmy' in the rear end that hadn't been there before.  I wasn't up to normal speed as I had heard some noise back there during my earlier running around, so I was being cautious.  That's when it happened.  The left rear wheel suddenly locked on me unexpectedly, and lurched the whole big assed monster truck into what should have been oncoming traffic.  Thankfully, there was none.  I wrestled the damned thing, cursing the truck, the maintenance and life in general, off the road, dragging a dead  frozen wheel off the road, and called for a tow once I got Godzilla safe.

Come to find out a 'forensic' check that -someone-had sabotaged the rear end...  I was meant to have the wheels lock up when I was at speed... and if it had done so, the car would have done a flip-and-barrel roll leaving the old IR as scattered parts with the scattered parts of my truck alllll over Route Irish....

So now it was a whooooooooole new game... minor annoyances aside, these fuckers were playing for keeps...  Attempted fucking murder?  Oh yeah...  this put a new level of paranoia in that, looking back, well it showed I wasn't exactly wrapped too tight.  I figured it was time for some payback of sorts...  as in I lost my shit and was about to go perform "The Harvest of A Thousand Heads" or that thereabout...  My Boss, Ranger J, found me in mid-preparation, sharpening my panga and decked in Ninjawear, ready to go out and 'have a good killin'"  My plan, (not well thought out of course, but at this time I was full on fucking bonkers) was to go out and jump some Gan-Gans and behead them, collect the nuggets, and stack 'em up pyramid style in front of the fuckers corporater HQ....

Needless to say I was on a plane within 48 hours of this little "incident" with an annotation from Ranger J saying essentially "The Loggie done lost his shit FOR REALZ and stick a fork in 'im, he's done."

So thus ends the first installment of the IR headed home (sans sleeveless sport-jacket, although I was headed in that direction) and I'll update again in Part Two: "The IR gets hit... AGAIN!"

Until then, I remain, batter but yet unbowed, the Intrepid Reporter, Big Country

Posted by BigCountryExpat at 5:57 PM No comments: